Ever go out with a bunch of friends, set up a bar tab on your credit card, eat and drink for hours, only to have a few of your "friends" excuse themselves to go to the restroom and then leave the premises when it came time to pay the tab?

If you're a U.S. citizen, some people from Bear Stearns recently came to your table and ordered appetizers, multiple entrees, enough drinks to float a small fishing boat, and some desserts for the group in the next booth. They lived like kings.

A few minutes before closing time, they excused themselves and ran for the parking lot. There you sat, wondering how to to explain all those credit card charges to The Little Woman Back Home.

Then, to add insult to injury, a husband and wife named Fannie and Freddie sat down with you the next night, ordered everything "to go", left the table to make some phone calls, and were never seen again. They apparently took their food with them. You're even more concerned this time, because you already talked some of your Chinese buddies into co-signing for this particular credit card.

Your Chinese buddies aren't very happy, and they're thinking of swinging by your house to pick up the dinette set you used as collateral.

You see, this is all fair. Fannie and Freddie have known all along that no matter how much debt they get into, or how many bad decisions they make, you're going to be there for them.

The Lehman Brothers are going to order food, drinks, birthday cakes, and promise the waiters very generous tips. They're going to bring in strippers from next door and purchase lap dances.

They're going to leave you with the bill. This is going to happen. And you're going to bend over and take it.

Because they can't be allowed to fail. You can, but they can't. They are the ones who have been making campaign contributions to their buddies in high places. All along there has been the unspoken promise that they can always put their expenses, their mistakes, and their bills on your bar tab.

It's a concept called "Privatize the profit; Socialize the risk".

Why aren't people rioting in the streets? Because we know the government will eventually print more money to pay for all this? Because the transactions are too complicated for us to understand? Because we're the ones who've been voting for Republicans and Democrats all these years?

Or perhaps it's because we're a nation of sheep. 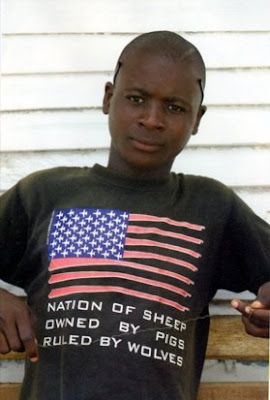 Posted by The Whited Sepulchre at 6:48 AM

Email ThisBlogThis!Share to TwitterShare to FacebookShare to Pinterest
Labels: Nation Of Sheep, Privatize The Profit - Socialize The Risk

Dunno, a bit harsh if you ask me. Like all other nations*, never looking too far ahead. Nothing's new under the sun.

(*)Except, maybe, the Chinese folks, but then even they changed their outlook lately.

The problem, as I've discussed in another place, is that we don't know how to riot in the streets anymore. We don't know how to have a revolution. The last time we had something approaching a revolution, the riots didn't go so well. People don't know what we can do to make a difference, and where violence is concerned, we cannot compare with what the military can do at the command of the government. Haven't you ever seen apocalyptic movies? Read apocalyptic books?