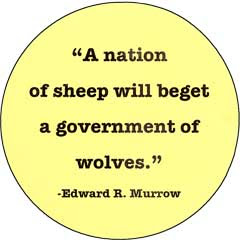 A large group of bankers, lenders, brokers and bean counters tried to get rich quick with subprime mortgages.
They failed.
I've tried to get rich quick a few times. I've split 10's against a dealer 6 upcard. I've put everything on red.
I've failed.
The U.S. House and Senate will soon debate a bailout plan for the big money people who have failed to get rich quick. It will be cloaked in the language of "preventing a meltdown of the financial system", but basically, they're wanting you to cover their losses.
The only way to do so will be with dollars that don't exist. They will print more. A truthful government would write .50 on the front of this new currency, instead of $1.00. It will be totally devalued.
The question is this: Will you vote to re-elect any congressperson or senator who votes for this bailout?
Posted by The Whited Sepulchre at 8:02 AM

Email ThisBlogThis!Share to TwitterShare to FacebookShare to Pinterest
Labels: Blackjack, Government Must Intervene, Privatize The Profit - Socialize The Risk

Throw them out is right! Damn straight! Those rats!! If we go into depression, so be it. Not one damn soul should be bailed out and shame on every single one of our politicians! Forget the party system...party unity my damn ass!!