Vikings for Palin: 3 questions you should ask before voting

Shortly after nominating Sarah Palin (center) for Vice President, John McCain's support among the Viking community increased from a lackluster 38% to 62%. 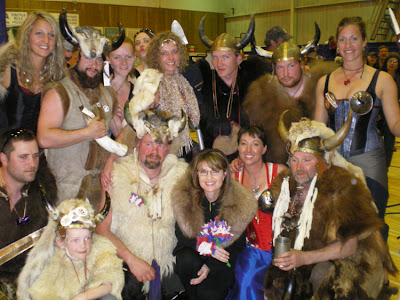 1) Was Palin's nomination a blatant attempt to woo disgruntled Democrats who are upset that Obama didn't nominate a Viking as his running mate?

2) Is this a blatant pander to Republicans who feel that McCain doesn't have the military skills to pull off our upcoming invasion of Sweden?

3) Or is this nomination an attempt to woo values voters who believe our nation was founded on the Norse principles of Thor and Odin?

Posted by The Whited Sepulchre at 6:41 AM

Im of largely Norse ancestory as is my wife. neither of us get a say.

I love the pictures of the bears. Very nice.

Thor, the Thunder god, was one of my favorite Marvel comics. She gets my vote.

Is that Palin in the middle? I think McCAin likes looking at her butt. Her viking butt. He cannot tell you how many homes he owns, but I bet he can describe her ass in great detail.

On second thought...It looks like a bunch of Pimp and Whore vikings.

After looking at this picture more closely...There is a lot of crooked armor.