Since I don't have nearly enough people in the blogroll, and this site is nowhere near cluttered enough, it's time to get back to my ongoing project of linking to every single site listed at Libertarian Blog Place.

Plus, writing anything else about the upcoming November 4th unpleasantness is starting to take on the ritualized characteristics of a Japanese Tea Ceremony. 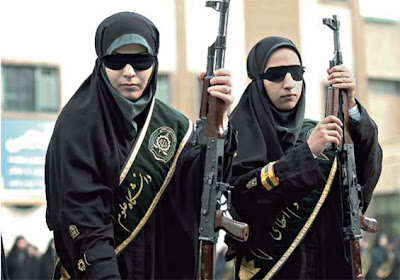 There's another outfit in there called Bureaucrash. It's a blog, an aggregator, and a general propaganda clearinghouse. If you're bewildered as to why a murderous bastard like Che is now popular among the trendoids, and need pics to illustrate the contradictions....they've got stuff like this: 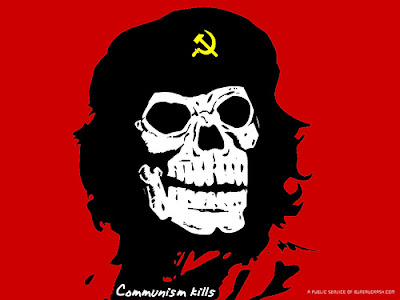 ....and this one hits every hot-button on my dashboard.

Speaking of capitalism, Captain Capitalism likes the facts, and just the facts. One of those facts is that the corporate tax rate in the U.S. is 40%. Don't try to tell him otherwise. Another good one....a newspaper article on the release of John McCain video from his time in a Hanoi prison stated that "the video portrays the Republican as a hero, but the message may be tarnished, as he is filmed smoking a cigarette." The good Captain's response begins as follows:

The message may be tarnished because he smokes a god damned cigarette?How out of f#cking out of touch are you in the media? The guy is in a god damned POW camp, all shot up in the 1960's and he dares to have a cigarette?!

What gets me, what really effing gets me, is how they completely miss the forest from the trees on this one. Here is John McCain, a genuine WAR FREAKING HERO, on his back, defending America and the media thinks, actually believes the fact he has a cigarette is going to have a political effect?

I've had Brian Micklethwait on the blogroll for a while, but he he's written an interesting post on a hero of mine who has almost been forgotten. William Tyndale translated the Bible into English, had a huge impact on our language, our politics, and our theology, and was hunted like an animal all over Europe as payment for his effort. There's a new book called The Adventure of English that Brian has excerpted on his blog, and we're fortunate that he's given us the Tyndale part.

That's all I've got. Hope you enjoy these people.
Posted by The Whited Sepulchre at 10:25 PM

You broke the camel's back for me, Allen, with your reference to Brian's blog. I have been thinking to add him to my regulars list for a long time, but resisted the temptation, as I barely manage to read the ones I got. But this last one just sounds way too interesting, not to mention that I just love his writing style.

Are any of these people having sex? If not, I am not interested.

So...are we all in agreement that we vote AL GORE on November 4th???

You are slacking...Who won the contest from last week??

I am going to start posting for services offered if you dont mind....Can I post pictures too?? :)

Hmm. Those Iranian police ladies must be as symbolic as their dinner jacket wearing President. Their rifles have no magazines.

I found these blogs to be offensive and irritable...just like me! Hopefully one day my pathetic little blog will be posted along with the likes of these fine bastards.

Alisa,
I don't get around to anyone on a daily basis, but Brian is one of the ones I get to at least once a week. KINDA LIKE I'D READ YOUR BLOG EVERY WEEK IF YOU WOULD TRANSLATE IT FROM HEBREW INTO ENGLISH !! IF ENGLISH WAS GOOD ENOUGH FOR ABRAHAM, ISAAC, AND JACOB, IT SHOULD BE GOOD ENOUGH FOR ALISA-IN-WONDERLAND.

Fembuttx,
I'm about to have a jillion visitors in here, courtesy of the Fort Worth Star Telegram. Clean up your act.

Jay,
Another friend of mind already pointed out the absence of magazines on the guns. Perhaps as a result of reading so many left-wing blogs, I've started to value symbolism over substance....

Slacker,
I've added you to the libertarian blogroll. Sign up your site on Zeby's Libertarian Blog aggregator when you get a chance. Great site. It's where I learned about Brian Micklethwait (see above).

Allen, unfortunately I haven't had the time to write anything in any language for god knows how long.

BTW, does Brian ever answer any of the comments?