I need a caption for this picture - Totally Unqualified Nominees Edition 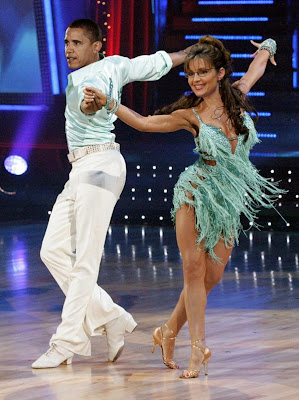 The winner of last week's caption contest is Nick M.
Flee came close.
Fembuttx took a scattershot approach, and overwhelmed the committee with too many entries. Otherwise, her "Whited In Drag" caption would've won. (I'm starting to like the beehive wig, glasses, and polyester outfit, now that she has suggested it. Very comfortable for lounging around the den.) The competition committee also took exception to her comments about my mother and my aunts. Mostly because the resemblance between that picture and some family photos from the 1950's is scary.

Obama and Palin picture from my aunts, via my mother.

Posted by The Whited Sepulchre at 10:03 PM

Oh yeah baby, I look good. Raiding the Whited's closet has really paid off....Lots of wigs, dresses, stockings and (score) this really nice white polyester pantsuit...I am going to drop this Alaskan bitch on her head...wait for it....

He thinks he has it all...don't they know that nipple slippage always wins...

Particuraly if they are tanned nipples....ALASKAN GOVERNOR TANNED NIPPLES ON DISPLAY IN WASHINGTON.

"Tonight on ABC: American television viewers rigorously vet Barack & Sarah; Then, on a very special According to Jim..."

Dirty Dancing II: The Maverick and the Messiah.

I loved Nicks caption more than mine so I'm glad he won. I can't compete with "The Maverick and the Messiah" so I'll just pull for jay@soob.