Here's MSNBC's Rick Santelli getting his 15 minutes of fame.


In slightly related news, the group ACORN (which recently got a few jillion stimulus dollars for community organizing) is now breaking into homes as a protest against "the forclosure crisis".


After snapping a lock with bolt cutters, ACORN member Louis Beverly told supporters "this is our house now."ACORN staged the demonstration to protest the foreclosure crisis sweeping the nation.The home in the 300 block of Ellwood Avenue used to be owned by Donna Hanks. She lost this home in September, after owning it since 2001. When things got tough she struggled to make her payments.
Her mortgage? $1995 a month.
Her income? $2200.

Out of all the possible foreclosures ACORN could've chosen, they're using this as one of their test cases? Isn't your house payment supposed to be no more than 1/3rd of your income?


"We feel that it was unjust, we feel as though she was strong armed robbed, we feel that Wells Fargo could have modified her loan and that is what we are asking for right now," says Beverly.


There's a warm place in my cold, cold heart for ACORN (hit the tab below), and nothing in this surprises me. But wait, there's more !


ACORN says that they will move Donna Hanks back in despite the fact that she no longer owns the house. During the taping of this story a man by the name of William Lane told ABC2 News that he owns the house currently--and plans to sue Acorn.


What William Lane should remember is that ACORN will soon have its share of the 3 or 4 billion stimulus dollars allocated for Community Organizing. They will own enough lawyers to fill up hell during an expansion year. Good luck, buddy.


One other thing.....I'm predicting increased sales for The Angry Mob Playset & Action Figures. Don't know why. It's just a feeling. 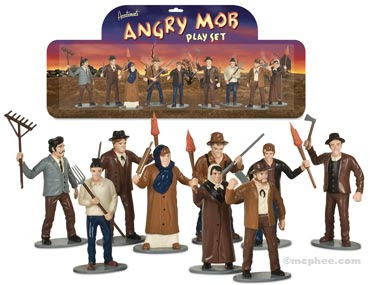 Posted by The Whited Sepulchre at 7:51 AM

I feel like a sucker most of the time. I did what I have been raised to do, bought a house no more than 3x my income, saved money in my 401k, live below my means, etc., and now I feel like it was all for nothing. I live worse than my more irresponsible co-workers and I have lost a lot of my 401k, my home value has been cut in half but I am not upside down on it, and I am paying 14k a year in taxes to support those who did everything they weren't supposed to do + war.

I gotta get me that Angry Mob playset...lol

Browncoat -- I think they've been on back order since Sarah Palin's election rallies.

Gee, that's such a well reasoned argument by the ACORN spokesperson!

TLG - We are now at least capable of bi-partisan idiocy.

This is classic, "It's not my fault" mentality. The majority of Americans have no accountability. Everything that happens is someone else's fault. Unfortunately, the majority also elect the officials.