Barack Obama's Accomplishments As President Of The United States Of America

Before I get to Barack Obama's Accomplishments As President Of The United States Of America, I want to send out a thank-you.
Thanks to Coalla (sp?) King, my 11th grade typing teacher at North Sunflower Academy, I can type for hours and hours. A lot of my posts are waaaay too long.

So back in September, just as a joke, I wrote some posts that were nothing but headlines.

Barack Obama's accomplishments as president of the Harvard Law Review.

The joke was that instead of my usual logorrhea, there was nothing at all beneath the headlines. Obama hadn't done much of anything other than reach for the next rung on his career ladder. 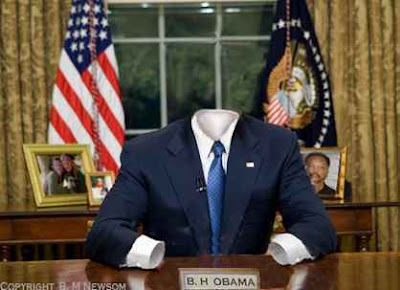 Dr. Ralph, who I keep expecting to appear on these pages morphed into some kind of bald, cat-stroking James Bond villain, gamely wrote comments under each post as fast as he could, I ridiculed The Doctor's contributions as quickly as I could, the fun lasted for a few days, and now those posts are among the leading Google results for Obama's accomplishments as lawyer, senator, teacher, organizer, and Messiah who came to save his people from their sins.

So..... 20 to 30 years from now, middle schoolers will have to write about Barack Obama's Accomplishments As President Of The United States Of America. They will go to the internet, or its future equivalent.

The internet is the first draft of history. Start commenting....
Posted by The Whited Sepulchre at 10:41 PM

1) He kept She Whose Name Is Not Spoken from getting the Democratic nomination.
2) He gave the republicans the spanking they so richly deserved.
3) In the interest of fairness, he has given the democrats a sum of stimulus/bailout money almost equal to the amount that republicans spent on the Iraq war.
4) There's still hope that one day he'll appoint a Commerce Secretary.
5) That vague, lingering guilt we had about budget surpluses for a few years during Bill Clinton's administration? That feeling that "we have a little extra money in the treasury and should spend it on poor people", or something worthwhile? Forget about it. You'll never be troubled by it again.
6) Speaking of the treasury, by nominating just four cabinet members and subjecting them to an acid-wash IRS audit, he was able to raise an additional $300,000.00 for the government.

And who says you aren't capable of finding the good in people? If I were fair-minded, I'd do the same thing for George W. Whatshisame...

Everyone seems to think that I have any loyalty to George W. Whatshisname.....
I don't.
But I did forget to include this little zinger:

And now The Obamessiah has said that the Afghan war can be won but not in creating a "Jeffersonian Democracy".

Or in other words. The beards win as long as they aren't too beardy...

So why Barack are you sending an extra 17,000 troops there?

Did FDR land the lads on Omaha Beach to ensure the Nazis were just a bit less Nazi?

I am outraged. War is obscene. A war fought real half-arsed is doubly so.

If we can't beat a bunch of bearded lunatics from the dark ages we is screwed.

8) Made a half-assed attempt at straightening out Afghanistan by sending an inadequate number of troops over to convert Those Who Bow To Mecca over to something less than a Jeffersonian democracy.

9) Since Obama has been elected, the Whited has had the term "stimulus package" in his blog 376 times. For a conservative Libertarian, isn't that a bit excessive??

WS - Horrors! I would never imply you were a loyal supporter of the Dubya. My rationale was more along the lines of: you've forced yourself to do something that no doubt seemed unnatural, I should do the same (in a political sense).

Let me predict one more....

10) Obama provided a soft landing for the Big 3 automakers, giving them an opportunity for one more year of mega-salaries before going down the drain.

Easy solution here: let the fat cats keep their jets, but make them $1 a year men (and women). I believe I've heard that idea tossed about.

Robert Reich had a commentary the other day where he pointed out the auto industry in America is not just the "Big Three;" chances are that Toyota or Honda vehicle is more "made in America" than some GM product put together in Mexico. His point was we needed to be protecting the workers, not the fat cats.

Or were you referring to the union workers as the ones with mega-salaries?

Dr.,
Both groups contributed; both groups will get the soft landing. It's only fair. (Maybe spread out over the next 2 years? They'll keep coming back to the trough until the poll numbers say they have to stop. Let me know when you think you've given enough.)

WS - you're in the transport industry, correct? New cars need to be transported to their final destination.

While you may not ship automobiles, other shippers do, so this "bailout" is indirectly helping people in your line of work, too.

See where I'm going with this?

Doctor,
I see where you're going. I see it all the time.

It's called Frederic Bastiat's "Parable Of The Broken Window". Gonna post about it soon.

WS - of course you see where I'm going. Like the broken window I'm perfectly transparent.

11) Made it easier for lots of investors to "get in on the ground floor" of the stock market.

Ground floor? We are rapidly approaching the basement.

Anonymous said...
This comment has been removed by a blog administrator.
May 12, 2009

12) Took thousands of automobiles off the road through the Cash For Clunkers program, ensuring that the price of used cars (and parts) will remain high. Ensured jobs for fat cat donors for at least another year (See number 10)
13) Remember the fear among right-wingers that Obama would legalize gay and lesbian marriage? Don't worry about it. He has succeeded in being just like G.W. Bush.
14) Obama will maintain full employment at Gitmo for another year. Not an easy task, considering his campaign rhetoric.
15) Extraordinary Rendition will continue. Not an easy task, considering his campaign rhetoric.
16) Obama has managed to guarantee full employment for defense contractors for at least another year. Not an easy task, blah blah blah.
17) In just 220 days of office, Obama has managed to re-energize the Republican Party. Out of all his accomplishments, this is the only one that'll ensure his everlasting punishment in the next life.
18) He got his daughters a really cool Portuguese Water Dog. Some friends of mine had two of them, and they've got a lot of personality. Great choice.

Placed orders for a dozen Bunker-Busting Bombs, with the obvious intent of blasting the crap out of the Iranian Nuke program.

THEN he won the Nobel Peace Prize.

After winning the Nobel, the Heisman, a Grammy, a Tony, President Obama won Motor Trend's "Car Of The Year".

20) Allowed the Republicans to retake the governor's offices in New Jersey and Virginia. Unfortunately, this will only encourage them.

Obama swatted a fly! it looked really cool on camera too.

Many wait from Obama immediate recovery and resolution of all problems they had through many years so far. It's unfair. During a year in White House Obama has done a lot. Here's a brief summary of major accomplishments of Barack Obama during his presidency:

21) Failed to make the oceans recede at the Climate Change conference in Copenhagen.
22) Showed "Presidential Cool", and provided a role model for other Heads Of State by remaining on vacation in Hawaii during a terrorist attack on an airliner.
23) By helping ram an incredibly healthcare bill through Congress, he hastened the retirement of Chris Dodd and a few other villains.
24) Proved not only that anyone can grow up to be president, but also proved that anyone can crash the White House for a state dinner.
25) Gave us Janet Napolitano, our first Director Of Homeland Security to try to use the Jedi Mind Trick. Shortly after a known muslim extremist was able to board an airliner, despite warnings from the man's father, with explosives in his skivvies, and was able to start a fire in the fuselage, and the airliner and 300 passengers were saved because a few passengers took matters into their own hands, Napolitano looked us in the eye and solemnly intoned that "The system worked".

26) You know that nice clean feeling you used to get while swimming in the Gulf Of Mexico?
Team Obama has ensured that you won't experience that for about a decade.
27) He has discovered how to keep kids from buying drugs. Screw up the economy so badly that they can't get any jobs.
28) Heroically managed to keep Gitmo open, despite intense opposition from, well, himself.

29) Protected heterosexual marriage (of the type enjoyed by Britney Spears, Liz Taylor, etc.) from his gay and lesbian supporters, despite his promises to end "Don't Ask, Don't Tell".

30) Got a LOT of people interested in voting again.

31) Barack Obama saved the Republican party. Almost all by himself. For this vile deed alone, he will always be linked with Andrew Johnson, Millard Fillmore, Richard Nixon, Jimmy Carter, and James Buchanan.

32) Barack Obama has now been responsible for firing more cruise missiles than all other Nobel Peace prize winners combined.

He's still in 2nd place for number of Arab deaths caused (and 3rd place for Muslim deaths) behind Yassir Arafat and Mikhail Gorbachev.

33) Achieved the rehabilitation of Newt Gingrich. Sheesh.
34) Helped a bunch of bullshit Green Energy companies go bankrupt after blowing through a lot more money than they would have otherwise.
35) Increased the number of guns in the hands of Mexican Drug Lords.
36) Achieved our first reduction in the Standard & Poor's ratings.
37) Presided over a Congress that has gone at least 1000 days without producing a budget.
38) Did one hell of an Al Green imitation at the Apollo Theatre.
39) Lost 3/4 of his economic advisors in three years. Managed to keep them from getting shot.
40) Introduced the horrific concept of "jobs created" into our political discourse, giving the illusion to the populace that the government creates jobs. For this alone, he will go to hell.