If Obama and McCain had NASCAR uniforms

A writer named Bob Bader has a proposal in the Lodi News-Sentinel:

....for the sake of simplicity we should more clearly identify the primary players, their partners and sponsors. To start with, the various individuals who have their snouts in the public trough should be obliged to wear uniforms of a sort. The politicians' clothes might resemble those worn by NASCAR drivers and their crews, hard hats and all. Their political affiliation should be clearly marked by big "Rs," "Ds" and "Is" displayed on their chests sort of like the big red "As" that outed some less-than-distinguished persons many years ago. The politicos' sponsors' logos would be prominently sewn on their clothes and caps. That way, when you are out hustling their favors and votes on one matter or another, you'd know who else is kissing their rings to garner favors — it'd say so right on their uniforms. That way, you could temper your ardor based on the competition or lack thereof.

This is similar to something I once saw in "Good" magazine a couple of months ago.
Here's a picture of Obama and McCain with their NASCAR-style logos: 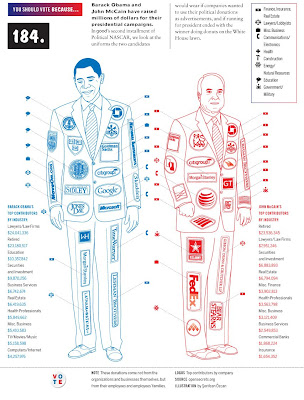 Click here to see the full-size original. Look at the logos that appear on BOTH uniforms. Bailout/bankrupt companies, one and all. Billions worth.

And people say that corporate sponsorship doesn't pay off....

Posted by The Whited Sepulchre at 6:22 PM

Weekends to peopleig2tmean that they can have a two-day wowgold4europe good rest. For example， people gameusdcan go out to enjoy themselves or get meinwowgoldtogether with relatives and friends to talk with each storeingameother or watch interesting video tapes with the speebiewhole family.
Everyone spends agamegoldweekends in his ownmmoflyway. Within two days,some people can relax themselves by listening to music， reading novels，or watchingogeworld films. Others perhaps are more active by playing basketball，wimming ormmorpgvipdancing. Different people have different gamesavorrelaxations.
I often spend weekends withoggsalemy family or my friends. Sometimes my parents take me on a visit to their old friends. Sometimesgamersell I go to the library to study or borrow some books tommovirtexgain much knowledge. I also go to see various exhibition to broadenrpg tradermy vision. An excursion to seashore or mountain resorts is my favorite way of spending weekends. Weekends are always enjoyable for me.
igxe swagvaultoforu wowgold-usaignmax wowgoldlivebrogame thsaleGoldRockUbrogameswagvaultgoldsoonoforuigxethsale