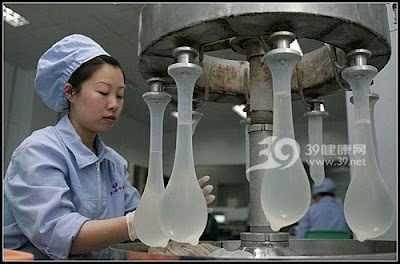 Ok, seriously....How much would you as a taxpayer be willing to overpay for condoms for someone else to use? What percentage? Is it equal to the percentage you'd be willing to overpay for an AIG exec to get a really nice bonus? How much more would you be willing to pay for an iPod made in your hometown? Or does it only make sense to spend the taxpayers' money in the most efficient way possible?
“I’ve made condoms here for 20 years,” Cindy Robinson, a $9.50-an-hour employee at Alatech, told the Star. “I understand why they bid the contract overseas, but they should buy American first, and I feel they are going back on their word.”
Cheap f***ers.
Posted by The Whited Sepulchre at 11:24 PM

OK... So, no febuttx? What's the world coming to? Oops... The puns are about to start flowing! Arrgh. I can't help it! It's just too hard to avoid (oy vey!) I mean we should just avoid this condom mess and just pull out all together! And if we wait too long, this could mean a long term issue we'll have to deal with...
OK. That was over quickly.

Who's the oriental babe in the photo?

Trade is beginning to open between the USA and USSR. Soviet Premier Nikita Khrushchev calls President Eisenhower with an request: "To celebrate our two great nations' friendship we'd like to order 1,000,000 condoms."

"No problem," replied the President.

Khrushchev hangs up and laughs with his aides about what a brilliant stroke of propaganda this will be.

Ike hangs up and calls the CEO of a condom company. "I'd like to place an order for 1,000,000 condoms right away to be sent to Russia."

"Consider it done," says the head of the condom company.

"Easily done. Anything else?"

"Yeah," says the President, "print 'Made in America, size small' on each one!"

I want whatever will fit in one of those condoms.

An entertaining photo posted on my blog.