The Heliocentric Heresy - Struck Down ! ! !

Forget about the Godless Evolutionists. They're mostly a bunch of harmless drudges in white lab coats.
Don't worry about the Secular Humanists, those pointy-headed academic villains of a few years back.
The real threat to humanity? The Copernicans.
Yes, the Copernicans. Those misguided souls who believe that the earth moves around the sun. 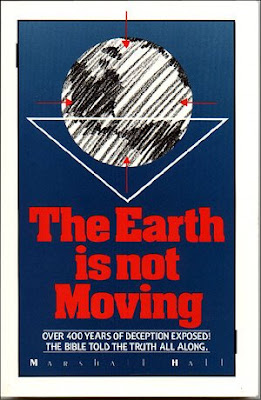 You can learn about the Copernicans at the "Non-Moving Earth & Anti-Evolution Webpage" of The Fair Education Foundation, Inc.

The people at The Fair Education Foundation bring up some good points. If all biblical texts are valid, inspired, and infallible, then somebody has some explaining to do. Look at this listing of 67 biblical references to the movement of the sun. Here are a few:

Here's a great example of how the bible gramatically and semantically (his words, not mine) denies Copernicanism:

Both Heliocentrists (those who believe the sun is the center of our solar system) and Geocentrists (those who accept the biblical truth of an earth-centered universe) agree that the moon is moving around the earth. No argument on that. Then we see that the Scripture says that Joshua commanded not only the sun but ALSO THE MOON to stop, and that both obeyed the command. He commanded both of them at the same time in the same breath in the same sentence to stop their motion. He obviously accepted as fact that the moon he was speaking to was a moon that was moving. Since, therefore, he addressed both sun and moon together in his command, it is a grammatical imperative that when he commanded a moving moon to stand still, he was ALSO commanding a moving sun to stand still.

How can you argue with that? I love this guy.
Let's close with this link, which includes an account of all the popes who have both condemned and embraced Copernicanism. It explains why all strategic attacks on Creationism and Geocentrism must be met with a rapid, harsh, and yet scholarly response:

This (Satanic) strategy and this strategy alone is the one capable of wrecking belief in the Bible. After all, the Origin of the universe, the earth, and all life forms constitutes the most rudimentary basis of all knowledge that there is. If people can be convinced that the Bible is wrong on its account of the Origins of everything, and that they have been superstitious dupes for believing otherwise, a moron can see that the virgin birth, resurrection, heaven...would soon be viewed the same way. No two ways about it, the Creation Account was the place for the Devil to strike. If trust in the Bible could be derailed on its Creation Account, trust in all the rest of the Bible would follow as night follows day. And as temporary "god of this world" (II Cor. 4:4) that is precisely where Satan struck.

Think about it. If you lose your faith in an earth-centered universe, can a loss of faith in , say, infant damnation be very far behind?

Book cover pic came from here, a site that I'm saving for another day.
Posted by The Whited Sepulchre at 2:16 PM

This is satire, right?

Satire? Satire? About something so obvious as the sun's movement around the earth?
Didn't you read the verses?

So if the Earth doesn't revolve around the Sun - which therefore doesn't rise and set every 24 hours by its logic either, then Genesis' Creation in 6 days + a day of rest must mean some other measurement of time too (and BTW, why does an omnipotent God need to rest?) Am reading an interesting book that touches on this called Fear of Knowledge, by Paul Boghossian (Oxford U. Press). Cheers, Tom

It is GREAT to hear from you again. I thought you were dead or something. If I'd known that I had to rant about the Heliocentric Heresy to bring you out of hiding, I'd have done it sooner.

;-) Thanks WS, and sorry for the long hiatus from your site - been on the move (quite literally, as in inter-states these past several months), but always have you on the top of my favorites (along with Assistant Village Idiot (AVI's) and Maggie's Farm) with all your most insightful and inciteful (harhar) posts/ideas, that keep my brain from turning to mush. Will be back more often now. Cheers, Tom

The domain name was registered in 1997, so if this is a joke, it is one of long standing.

Coincidence?
I think not.

You're kidding right? This is ridiculous. and absurd. Sometimes, even dissenting opinions need to be silenced, (sorry J.S. Mill).

Anonymous,
I'm don't run editorials here. I'm just a reporter.
But can you find any holes in this guy's logic?

To the person in Hickory, North Carolina, who keeps accessing my blog by linking to this one post....

You can hit "Home" at the bottom of the comments, and save what appears there. It'll get you to the new stuff without having to go through this post about the Heliocentric Heresy every time.