Why I Am A Libertarian, Part 3, Childhood Reading Edition

Because of reconnecting with old friends on Facebook, I'm doing a series of posts about what makes someone go from political near-apathy to rabid Libertarian. I feel the need to explain myself. 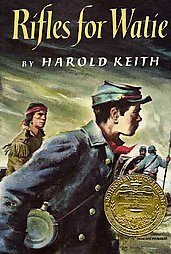 It's the story of a kid named Jeff who goes to fight for the Union army during the Civil War. Jeff is eventually asked to infiltrate the enemy lines and become a spy inside the Confederate army. Here's a section that describes Jeff's first Confederate payday:

"....each trooper received a month's salary, too. Jeff looked curiously at the crisp, new green banknotes, two fives and five ones.
"Know what I'm going to buy first?" Jeff said to Hooley, later. "There's a man selling ginger cakes up on the street. I'm going to buy me a whole dollar's worth. Come on, Hooley, I'll buy you a chunk, too."
Promptly they found the vendor. He was a big, bare-headed fellow, who had built himself an oven in the hillside next to the town blacksmith. He was standing behind a three-foot square of freshly baked brown gingerbread, fanning the flies off it with one hand. The hot, sweet smell was overpowering. Jeff slid off Flea Bite (his horse).
"Give us a dollar's worth of that," Jeff said, waving his one-dollar bill proudly.
The vendor extended his dirty hand, plucked the bank note away, laid it on the square of gingerbread and, cutting around it neatly with his bowie knife, hewed off a piece exactly the size of the bank note and handed it to the surprised Jeff. Then he pocketed the bill. Thus Jeff learned for the first time of the weak buying power of Confederate paper money.
Hooley laughed uproariously as Jeff broke off half his small piece and handed it to him. Jeff grinned ruefully. "I guess that's what Pa meant when he told me once that money is the measure of value."

When I read this in the early 1971, bread sold for .25 cents per loaf. The idea of only getting a dollar bill-sized piece of bread in exchange for a greenback seemed ridiculous.
I don't know why, but that passage from "Rifles For Watie" has always stuck with me.

Flash forward to the year 2009. Take a one dollar bill into Starbuck's and see how much bread or pastry it will buy.
Is it because bread is scarce? Is there a huge demand driving the price up?
Nope.
It's because our government is financing its goofy-assed spending habits by printing money. 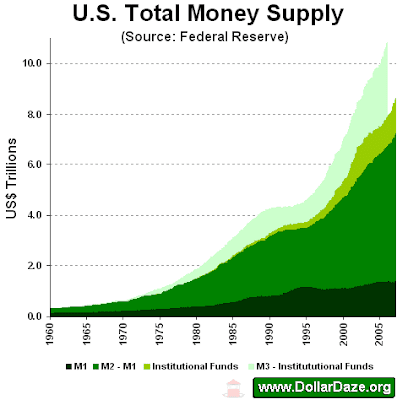 With the exception of the Ron Paul splinter of the Daddy Party, the Libertarians are the only ones who have consistently protested against this kind of taxation without legislation.

Jeff couldn't buy very much bread with his paycheck because the Confederate government was financing almost everything with printing presses instead of silver and gold. (Plus, most outsiders knew that the Confederacy was doomed.) Today, a Confederate one-dollar bill has no value to anyone but collectors.

So keep saving U.S. dollar bills. In 140 more years, if people start collecting them, they might once again be worth what they were in 1971.

But in the meantime, don't plan on buying very much bread with them.

Posted by The Whited Sepulchre at 10:20 PM

Email ThisBlogThis!Share to TwitterShare to FacebookShare to Pinterest
Labels: funny money, inflation, influences, libertarianism, schoolteachers, Too Many Books, why i'm a libertarian

You are a Libertarian because you are a good person who applies truth to policy.

You are a Libertarian because you want to see that help gets to the people that truly need it using the most efficient and effective way possible.

You are a Libertarian because you took the wisdom accrued by the experiences of your life and applied them against an objective view of the outcomes of government's wrong-headed, but sometimes well-intentioned, programs.

I know you, Whited!

By the way, careful where you tread, Whited! Similar postings on the www.lvrj.com (Las Vegas Review-Journal) blogs got a knock on the door by Uncle Sam asking for names, addresses and phone numbers. The newspaper didn't (and couldn't really) turn over user info, but that shows how our friendly, transparent, people first, administration is turning off the spigot of free speech. It's not that important, right?

Also, they've refused to hand over names of invited visitors to the 'People's House' aka The White House. It's beginning to be a little less and less transparent, don't cha think?

Bush did the same thing...

Libertarians have only one version of the truth? That's not what I heard.

I just thought Whited was getting cranky in his old age.

Still, I have to give you points for saying "wrong-headed but well-intentioned programs." Coming from you, that's practically generous (grin).