"The Burning Hell" - Episode Four - Where The Worm Never Dies 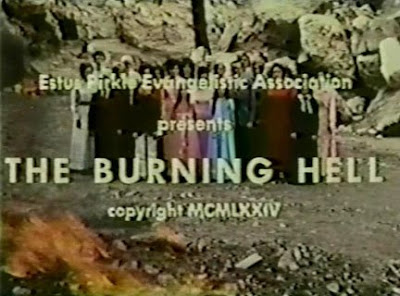 It's Sunday morning, and time for another visit to the video collection of New Albany Mississippi's Reverend Estus Pirkle.
Every weekend I'm posting a clip from "The Burning Hell", Reverend Pirkle's early 1970's masterpiece. The film depicts the eternal consequences of disagreeing with Brother Pirkle's theology.
This movie me nightmares when I saw it in church one night in the early 1970's. I spent years praying and worrying about friends and relatives who might be "lost".
So now I'm making fun of it every Sunday morning.

If you want to watch the previous episodes, hit the Estus Pirkle label at the bottom of this post.
To recap:

Episode two begins the story of two hippies, Ken and Tim, who disagree with Reverend Pirkle's theology. They've been corrupted by someone named Dr. Long, who teaches that God would never send anyone to hell forever. Within minutes, Ken and Tim are severely punished. Ken's head is cut off in a motorcycle accident and Tim has to endure flashbacks of every incident where he rejected God's saving sacrifice.

Episode three has Tim staggering back into Reverend Pirkle's Sunday A.M. service, taking a seat near the front, and listening to stories about eternal damnation. The North Mississippi All-Stars cover themselves in mud, slime, and clothes from their tenant houses, set a pasture on fire, and run around saying "Ah Hate Chew".
One of the more influential demons reunites Ken's head with his body and carries Ken away to be roasted for a few billion decades.
Reverend Jack Hyles, who went on to financial scandals, child abuse scandals, etc., etc., etc., makes a cameo appearance to explain why he loves the idea of hell, and wouldn't bother getting out of bed in the morning without it.

That gets us to #4, the part we all remember. For those of us who saw this movie at church, at a youth retreat, or at a lock-in, this episode has the money shots. Some of us stayed up for weeks worrying about dead relatives and worms.....

If you find my commentary helpful, it continues below the YouTube clip.

:24 Reverend Hyles reads a list of Hell's characteristics, a list that sounds similar to the goings-on at his last church.
:48 Tim has a flashback to other church services where he didn't give his heart to Jesus.
1:50 For those of you who didn't grow up with altar calls, this is one of them. At the end of a worship service the choir and congregation sing something evangelical while the preacher tries to talk people into becoming Christians.
It would make sense to do this on streetcorners or in shopping mall parking lots (if you buy into the concept), but it makes absolutely no sense to do this inside of a church.
Why?
Because the people inside a church, for the most part, are already Christians. The man is fishing inside his own aquarium. But it gives the congregation the feeling that they're part of some large evengelistic outreach.
I can't tell you how many hours of my life I've spent listening to this stuff.
2:25 God is love. He is defined by love. He loves you so much that he sent his son (1/3rd of himself but also 100% of himself - it's a long story) to die in your place.
But if you can't believe this story, this is what he's going to do. Bring plenty of water with you.
3:15 This is what gave me the willies back in 1974. Isaiah 14:11 and Mark 9 talk about worms as a form of punishment.
3:45 Reverend Pirkle goes back to the original Greek to explain that these aren't symbolic worms. These are genuine maggots.
4:05 Number one, where did they get the maggots? Number two, how much did they have to pay these people for the stunt work? Number three, can you imagine people watching this and taking it seriously and literally? People with doctorates?
4:30 Pirkle and the Delta Dramatists are now at an amphitheatre, putting on a performance of "The Death Of Herod - With Worms", complete with costumes and special effects. Tom Savini can rest easy.
5:08 Pirkle: Herod would soon be just a dim memory as the worms devoured his organs. They feasted on his black heart, relishing his ???? intestines. They devoured his eyeballs and face and all of him until nothing was left but the odorous rotten form of what was once the evil Herod. What a horrible sight to behold. What a stench there must have been. Does this give you a nauseating feeling?
Well, yeah.
5:35 Reverend Pirkle begins the parable of Lazarus and Dives.
That's all for this week. In closing, may I direct you to one other website? Here's an account (with pictures) of a recent showing of "The Burning Hell". Be sure your sound is turned on.
Notice the contrast between the look of the website and the contents of this movie?
Come back next week for Episode 5 of THE BURNING HELL ! ! !
Posted by The Whited Sepulchre at 5:47 AM

Holy smokes! This production company spent all of their money on location shoots... They actually went to Petra in Jordan! Probably should've spent a little more on actors and special effects. With that said, that's some pretty method acting with the guy letting maggots crawl into his ears and nose.

There are glorious, glorious, wonderful moments coming up next week.
Let's just say they shoulda spent some money on a harp.