From The City Paper, in Nashville:

Vanderbilt University last night moved to distance itself from the controversy over a statement made by its Muslim chaplain last week at a campus event.
At a forum entitled "Common Ground: Being Muslim in the Military" on Jan. 25, Chaplain Awadh A. Binhazim responded to a question from student Devin Saucier, vice president of the V.U. chapter of conservative group Youth for Western Civilization, by saying he would have to "go with what Islam teaches" regarding the imposition of capital punishment on practicing homosexuals.


For those of you who are fans of Saul Alinsky's "Rules For Radicals", Mr. Saucier employed Rules # 4, 5, and 6.
4. Make the enemy live up to their own book of rules.
5. Ridicule is man's most potent weapon.
6. A good tactic is one that your people enjoy.


Several Islamic countries, including Iran and Saudi Arabia, are known to have put people to death for homosexual activity. 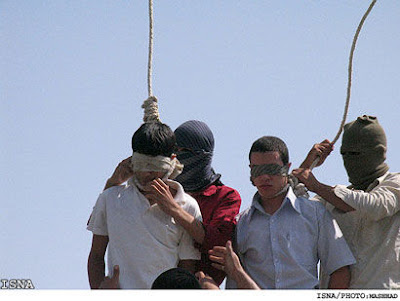 After accounts of the event and YouTube footage of Binhazim's comment led to widespread criticism on both conservative and gay-oriented blogs, the university put out a statement Monday evening noting that the event was part of its "Project Dialogue," a series meant to bring "diverse viewpoints" to campus.

Well, if diversity was the goal, they met it.


"No view expressed at a Project Dialogue or similar campus forum should be construed as being endorsed by Vanderbilt," the statement said. "The university is dedicated to the free exchange of ideas. It is the belief of the university community that free discussion of ideas can lead to resolution and reconciliation."
The statement went on to reaffirm V.U.'s commitment both to free speech and to non-discrimination.


In the words of Glenn Reynolds, "Luckily, he (Binzahim) was Muslim, not Baptist, so it won’t be a big national scandal."
Seriously. This statement was made on January 25th. The Nashville paper published this account of the frenzied back-pedaling on February 1st. At times like this, I wish Keith Olbermann had been there.


It sounds like they just let him hang out at Vanderbilt, doesn't it?


Binhazim is employed as a professor of pathology at Meharry Medical College.


A busy man, Mr. Binhazim.
Back to Glenn Reynold's point about the harsh and savage criticism (justly) leveled against Baptists, vs. the free pass given to Muslims on this issue..... If a political, military, or celebrity spokesperson of the fundamentalist Protestant persuasion held these beliefs, he would be unable to speak in public on any issue without having to take questions about his belief that gays and lesbians should be executed.
And yet with the Muslim faith, we agree to accept it as part of their culture. Why do our newspaper and TV journalists give them a free pass on this?

Picture of the execution of two gay Iranian teenagers came from here.
Posted by The Whited Sepulchre at 6:41 AM