Reason magazine on the Davis-Bacon Act

Here's Reason magazine on The Davis-Bacon Act, one of the most vile pieces of legislation ever signed into law.  Until the last week, anyway.
The Davis-Bacon Act essentially gave us the minimum wage, mostly as a way to keep minorities from competing with the white majority for certain jobs.
An excerpt:

To make matters worse, the Davis-Bacon Act has explicitly racist origins. It was introduced in response to the presence of Southern black construction workers on a Long Island, N.Y.. veterans hospital project. This "cheap" and "bootleg" labor was denounced by Rep. Robert L. Bacon, New York Republican, who introduced the legislation. American Federation of Labor (AFL) president William Green eagerly testified in support of the law before the U.S. Senate, claiming that "colored labor is being brought in to demoralize wage rates."


Emil Preiss, business manager of the New York branch of the International Brotherhood of Electrical Workers (a powerful AFL affiliate that banned black workers from its ranks) told the House of Representatives that Algernon Blair's crew of black workers were "an undesirable element of people." The bill's co-sponsor, Republican Sen. James Davis of Pennsylvania, was an outspoken racist who had argued in 1925 that Congress must restrict immigration in order "to dry up the sources of hereditary poisoning."

The result was that black workers, who were largely unskilled and therefore counted on being able to compete by working for lower wages, essentially were banned from the upcoming New Deal construction spree. Davis-Bacon nullified their competitive advantage just when they needed it most.

Politicians do silly things when times get tough.  And when times aren't tough.  Here's some more from Reason:

More recently, the Obama administration extended Davis-Bacon via the American Recovery and Reinvestment of Act of 2009, also known as the stimulus bill. According to an All-Agency Memorandum issued by the Department of Labor, Davis-Bacon now applies to all "projects funded directly by or assisted in whole or in part by and through the Federal Government." 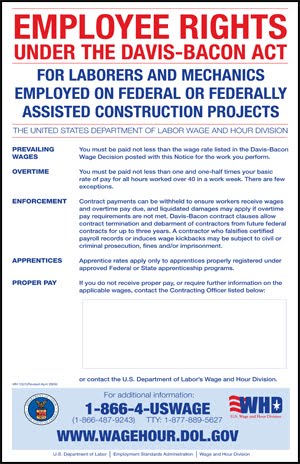 In other words, even projects that are only partially funded by the stimulus must obey the costly pro-union requirements of Davis-Bacon. With the economy floundering and the government apparently set on another New Deal-style construction spree, the last thing taxpayers needed were rules that force stimulus projects to cost even more.

In sum, we have a law that drives up the costs of federal projects, hurts unskilled workers, unfairly advantages organized labor, and has explicitly racist roots. It's time for Davis-Bacon to go.

But we're too humane to do it any other way.
Posted by The Whited Sepulchre at 7:20 PM

Since Obama's Stimulus plan has gone into effect to create, as he said, "shovel-ready jobs" - unemployment in the construction industry has hovered around the 25% level. There is some shoveling involved with all of his government programs to create jobs - but they don't include anything in the construction arts. The shoveling I'm referring to are involve the bovine fecal expulsion arts.

It's impossible to believe any significant amount of money has been spent on infrastructure projects.

I had a project just steps from my home called the Geary Intersections Rehabilitation Project. The only thing they did was tear up and replace the wheelchair ramps which already existed on the corners.

The project cost over $3 million and "created or saved"...wait for it... NINE JOBS.

While the project number was clearly visible on the sign giving credit to ARRA and I found the project immediately on Recovery.gov at the start of the project, it has COMPLETELY DISAPPEARED from Recovery.gov now. I found information on it after digging through the ARRA, Department of Transportation, and California Recovery website for hours.

Meanwhile, giant potholes in the road are putting people's steering out of alignment.

Now the city of San Francisco is spray painting cracked but serviceable sidewalks and forcing homeowners to get a building permit and hire a contractor to repair their sidewalks. But they won't fix our roads.

I think I'm going to take a walk down Billionaire's Row this weekend with a can of white spray paint. If I knew the addresses of the Mayor and Board of Stupidvisors, I'd pay them a visit.