South Texas, Afghanistan, and the cost of prohibition

From the Fort Worth Star-Telegram:

MEXICO CITY — As more U.S. states permit medical marijuana, and California considers legalizing cannabis sales to adults, Mexico is voicing irritation at the gap between drug laws north and south of the border and saying it undercuts the battle against Mexico's violent drug cartels.

....More states are permitting medical marijuana use, and New York may become the 15th to do so. California, which pioneered medical marijuana use in 1996, is moving even faster, setting a November vote on whether to legalize personal marijuana possession and allow regulated sales of marijuana to those over age 21. If approved, the move would be the first of its kind in the U.S.

A Mexican historian and commentator, Lorenzo Meyer Cossio, said the government of President Felipe Calderon "feels offended" by the growing trend of U.S. states to allow medical marijuana, or perhaps go further as California may do. Mexican laws against marijuana and narcotics remain tough, the result of U.S. pressure dating back more than half a century, he said.

....Calderon, the head of a center-right party, deployed 50,000 soldiers to the border days after coming to office in late 2006 to combat the cartels, which derive huge profits from marijuana as well as cocaine, heroin and methamphetamines.

....Mexican marijuana production is soaring, according to a report issued Thursday by the Justice Department's National Drug Intelligence Center.

.....Even advocates of the decriminalization of marijuana in the U.S. said they empathize with Mexican leaders, who are deploying troops in a fierce battle with well-armed drug cartels at the urging of Washington.

They are caught in the middle of realities of U.S. consumer demands and American political intransigence," said Stephen Gutwillig, the California director of the Drug Policy Alliance, an advocacy group for alternatives to the drug war.

Gutwillig said he thinks the trend toward allowing medical marijuana in U.S. states, and even the outright decriminalization of marijuana, would eventually weaken the Mexican drug cartels. "Any sort of authorized regulated market for marijuana in the United States cannot be good for the bottom line of criminal cartels," Gutwillig said.

Also from the Star-Telegram:

FORT HANCOCK -- When black SUVs trail school buses around here, no one dismisses it as routine traffic. And when three tough-looking Mexican men pace around the high school gym during a basketball game, no one assumes they're just fans.

Fear has settled over this border town of 1,700, about 50 miles southeast of Ciudad Juarez, Mexico, epicenter of that country's bloody drug war. Mexican families fleeing the violence have moved here or just sent their children, and authorities and residents say gangsters have followed them across the Rio Grande to apply terrifying, though so far subtle, intimidation.
The message: We know where you are.
At schools in Fort Hancock and nearby Texas towns, new security measures and counseling for young children of murdered parents have become a troubling part of the day.

"I have friends with fathers who've been annihilated," said Israel Morales, a junior at Fort Hancock High School. "They just hug you and start crying. It just traumatizes you."
Mexican drug gangs have not fired a single shot in Fort Hancock, and no one has disappeared. But as drug violence continues unabated in and around Ciudad Juarez, residents of Texas border towns fear it will spread their way.

Schools have installed security cameras and hired an armed off-duty sheriff's deputy to patrol its three campuses for the first time.

Here's Alfred W. McCoy, of the Countercurrents website, on one of our biggest problems in Afghanistan: 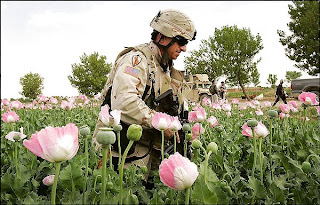 In the late 1990s, the Taliban, which had taken power in most of the country, lost any chance for international legitimacy by protecting and profiting from opium -- and then, ironically, fell from power only months after reversing course and banning the crop. Since the US military intervened in 2001, a rising tide of opium has corrupted the government in Kabul while empowering a resurgent Taliban whose guerrillas have taken control of ever larger parts of the Afghan countryside. 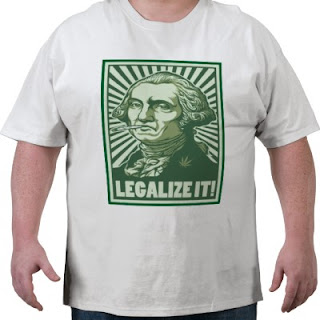 This is no better than anecdotal evidence, BUT.....  Among my ex-con employees, I've had two who worked on death row (cleaning, etc.).  According to them, prison authorities couldn't keep drugs out of death row.  Think of the implications.
We're spending billions, incarcerating millions, and creating food for the Big Government machine by insisting on prohibiting something that certain people are going to do, no matter what.
How much worst does the situation in Afghanistan and Mexico have to get before we end the Drug Lords' production monopoly?
Posted by The Whited Sepulchre at 7:40 AM