Back in March, I linked to a Radley Balko post about a nasty incident in Missouri where a SWAT team broke into a family's home, shot and killed one of their dogs, and then shot an injured their Corgi. All in front of a 7-year old. 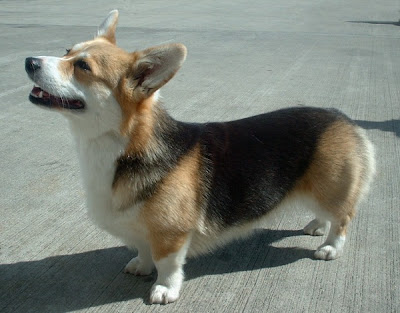 Those Corgis, you gotta watch out for them.

Since Obama's goon squad discovered a misdemeanor-level amount of marijuana on the premises, they were able to charge the homeowner with possession and child endangerment.

In the words of Mr. Balko:

Storming a home with guns, then firing bullets into the family pets as a child looks on = necessary police procedures to ensure everyone’s safety.
Just so we’re clear.

My take on Obama's Boys In Black went as follows:

When are we going to stop paying people to do this job?

We now have the Gestapo's Swat Team's video of the incident.  Imagine this is your home.  It's your yard.  That's your son, and those are your pets.
The homeowner is named Jonathan Whitworth.  His reaction at the 2:50 mark is heartbreaking.

How much longer are we going to put up with this? Especially when our last three presidents have affirmed that they've smoked marijuana?  Or in Obama's case, used cocaine?

First they came for the Corgis, and I did not speak up....

Please email this post to every drug warrior you know.
Posted by The Whited Sepulchre at 7:20 AM

If you're wondering about the Obama references in this post....I included them because of what I've learned from reading Saul Alinsky's masterpiece "Rules For Radicals". Here's rule #13:

13. Pick the target, freeze it, personalize it, and polarize it.

If we don't start personalizing crimes like this, the world will never change.

I wouldn't be surprised at all if they planted the drugs there.

Dude, I am at a loss for words. Really, I have nothing...

Thanks for posting this. I will be sending this off to everyone I know. Giving you credit of course.