Christian woman sentenced to death in Pakistan for Blasphemy

From The Telegraph (UK):

Asia Bibi, a 45-year-old mother-of-five, denies blasphemy and told investigators that she was being persecuted for her faith in a country where Christians face routine harassment and discrimination.

Christian groups and human rights campaigners condemned the verdict and called for the blasphemy laws to be repealed.
Her supporters say she will now appeal against the sentence handed down in a local court in the town of Sheikhupura, near Lahore, Pakistan.
Ashiq Masih, her husband, said he had not had the heart to break the news to two of their children. 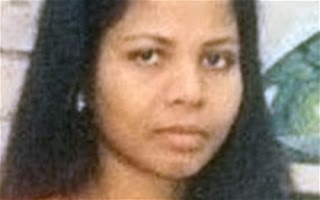 "I haven't told two of my younger daughters about the court's decision," he said. "They asked me many times about their mother but I can't get the courage to tell them that the judge has sentenced their mother to capital punishment for a crime she never committed." Mrs Bibi has been held in prison since June last year.

The court heard she had been working as a farmhand in fields with other women, when she was asked to fetch drinking water.

Some of the other women – all Muslims – refused to drink the water as it had been brought by a Christian and was therefore "unclean", according to Mrs Bibi's evidence, sparking a row.

The incident was forgotten until a few days later when Mrs Bibi said she was set upon by a mob.

The police were called and took her to a police station for her own safety.

Shahzad Kamran, of the Sharing Life Ministry Pakistan, said: "The police were under pressure from this Muslim mob, including clerics, asking for Asia to be killed because she had spoken ill of the Prophet Mohammed.

Heck, Mohammed was a pedophile who owned (black) slaves.  How much worse can it get?  Did the woman accuse him of poor dental hygiene?
"So after the police saved her life they then registered a blasphemy case against her." He added that she had been held in isolation for more than a year before being sentenced to death on Monday.

"The trial was clear," he said. "She was innocent and did not say those words." Earlier this year, Pakistan's internet service providers were ordered to block Facebook to prevent access to supposedly blasphemous images.

Human rights groups believe the law is often used to discriminate against religious minorities, such as the country's estimated three million Christians.

Although no one has ever been executed under Pakistan's blasphemy laws – most are freed on appeal – as many as 10 people are thought to have been murdered while on trial.

Ali Hasan Dayan, of Human Rights Watch, said the blasphemy laws were out of step with rights guaranteed under Pakistan's constitution and should be repealed.

"It's an obscene law," he said. "Essentially the blasphemy law is used as a tool of persecution and to settle other scores that are nothing to do with religion.

"It makes religious minorities particularly vulnerable because it's often used against them."
Posted by The Whited Sepulchre at 6:33 AM

Email ThisBlogThis!Share to TwitterShare to FacebookShare to Pinterest
Labels: heresy, The Religion of Peace

This is why we need a Crusade.