I don't believe that God intervenes in human activity, or anything else.
There are only three exceptions to this rule:

Let's concentrate on #3.  Jerry Jones and the City Of Arlington conspired to steal some peoples' houses, bulldoze them, and build a Pharaonic Pyramid of a football stadium on the site of the theft.
It was all legal, done within the realm of Eminent Domain, and at least 51% of Arlington voters voted in favor of the theft.
You can hit the Jerry Jones or Eminent Domain tags at the bottom of this post to read some older rants on the subject.

Tomorrow's Super Bowl was supposed to be a week-long celebration of the crime, seven days of partying to reward the many who voted to rob the few.  Million-dollar parties, Concerts.  Swarms of media.

Full Disclosure: My employer, Jukt Micronics, got a contract to build the ESPN booth that they're using in downtown Fort Worth.  Nice piece of work, but it's generally been too cold for ESPN to use it.

But what has happened?  We've had ice storms, sleet, and snow.  The power companies have had to implement a rolling blackout system for businesses, warehouses, manufacturers and some residences.  Traffic has slowed to a crawl.  Or no crawl at all, because everyone has stayed home all week.  We don't do snow very well. 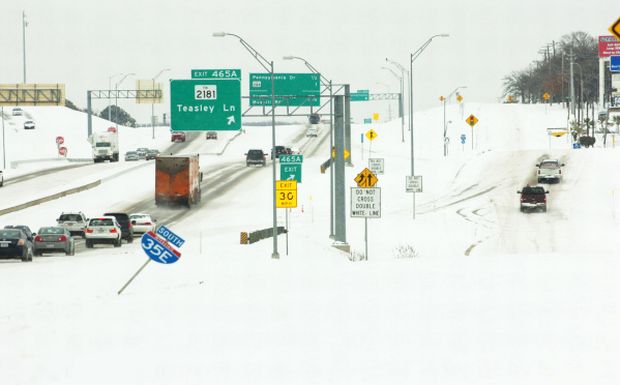 DFW airport and Love Field have had to operate at a limited capacity when they could operate at all.
Downtown Fort Worth was supposed to have crowds rivaling Disneyworld.  On my one trip downtown I saw a few drunken Cheeseheads wandering around, Wisconsinites who know how to deal with this kind of weather.  That was it.

And then, this happened:


As bowling ball-size chunks of ice fell on him from the roof of Cowboys Stadium on Friday afternoon, Win McNamee said he didn’t think he would survive.

“Honestly, while it was hitting me, I was thinking I’m going to die here,” McNamee said. “It was pretty frightening.”
McNamee, a veteran photographer who works for Getty Images, was one of six people injured by falling ice outside the site of Sunday’s Super Bowl XLV in Arlington. He broke his left shoulder in four places and was planning to fly home to Washington, D.C., on Saturday and undergo surgery soon.
None of the other injuries were thought to be life-threatening, authorities said. One person remained hospitalized in stable condition Friday evening, officials said.

Lord have mercy, what a mess.  And why do I think that it isn't over yet? 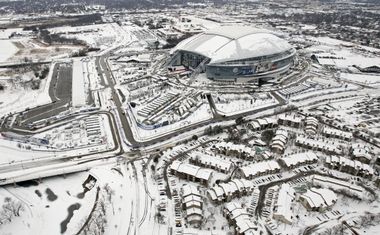 As for the economic impact of the disastrous weather?  Go here for ABC's evaluation of it.  We've got hotel cancellations left and right, retailers shuttered, and restaurants operating at 10% of capacity.  The national media is gleefully mocking Arlington's lack of preparedness for this kind of weather.  Especially the reporters who have been told by the NFL that their cities (Denver, Seattle, Detroit) aren't good Super Bowl locations because of their....weather. 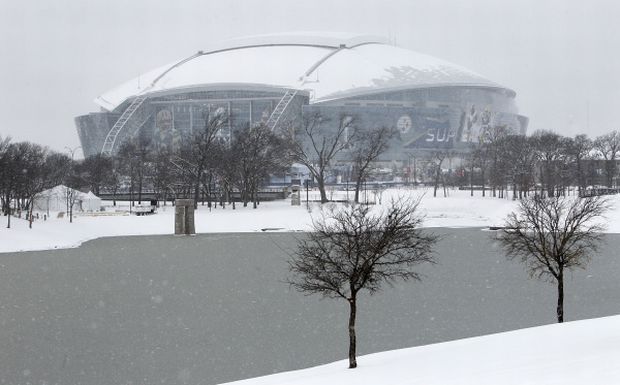 How could something like this happen?  I mean, what are the freakin' odds?

God hates Jerry Jones.  The Lord God Jehovah hates Jerry Jones with the white hot passion of a thousand dying suns.  And Jerry must atone.  Now.  Unless he wants to spend another decade with fewer playoff wins than any current NFL General Manager over a ten year period.

Here's the Old Testament prophet Ezekiel, speaking out on the subject of Jerry, The Cowboys, and Arlington:

Ezekiel 22:29 The people of the land have used oppression, and exercised robbery, and have vexed the poor and needy: yea, they have oppressed the stranger wrongfully.

Ezekiel 22:31 Therefore have I poured out mine indignation upon them; I have consumed them with the fire of my wrath: their own way have I recompensed upon their heads, saith the Lord GOD.

I don't think there are any Eagles, Redskins, Giants, or Packers fans who could've said it any better.
So what do we do?

Here is a purification ritual that Jerry could undergo.  This comes from the Holman Bible Dictionary.


A cleansing agent (to atone for sin) was required: water, blood, or fire (Numbers 31:23). Water, the most common purifying agent, symbolized cleansing and was used in the rituals related to a waiting period. The person was to wash the clothes and bathe the body (Leviticus 15:7). Blood was used to cleanse the altar and the holy place (Leviticus 16:14-19). It was mixed with other ingredients for cleansing from leprosy (Leviticus 14:1) and contact with the dead (Numbers 19:1).


The final element of the ritual of purification is sacrifice. Purification from discharges required two pigeons or turtledoves, one for a sin offering and one for a burnt offering (Leviticus 15:14-15,Leviticus 15:29-30). A lamb and pigeon or turtledove were offered after childbirth (Leviticus 12:6). Sacrifice in the purification ritual for lepers was quite complicated, indicating the seriousness of leprosy as a cause of impurity (Leviticus 14:1). The priest also touched the person's extremities with blood from the offering and with oil, cleansing and life-renewing agents. The poor were allowed to substitute less valuable animals for use in their sacrifices.

To cut to the chase:  If we're ever going to have a succesful NFL franchise in Tarrant County, Jerry Jones must strip down to his skivvies, wash one of his suits on the 50-yard line of his gaudy Temple Of Baal, mop the field with the blood of Wade Phillips, and perform a ritual sacrifice by slaughtering some of his worst draft picks in the City Of Arlington's luxury suite.
That should do it.

But what about all the little people, Jerry's victims, the refugees who were dispossesed by Eminent Domain ?
Once again, let's see what the Holy Scriptures have to say:

Leviticus 6: 1-7 :   "The Lord spoke to Moses, saying, “If anyone sins and commits a breach of faith against the Lord by deceiving his neighbor in a matter of deposit or security, or through robbery, or if he has oppressed his neighbor or has found something lost and lied about it, swearing falsely—in any of all the things that people do and sin thereby— if he has sinned and has realized his guilt and will restore what he took by robbery or what he got by oppression or the deposit that was committed to him or the lost thing that he found or anything about which he has sworn falsely, he shall restore it in full and shall add a fifth to it, and give it to him to whom it belongs on the day he realizes his guilt. ... "

It's fairly simple, isn't it?  Jerry and Arlington must determine the current value of the stadium, the parking lot, the team, along with the value of having God on their side.  They must give that amount of money, plus 1/5th, to the people they stole the land from.
Until that happens, we will labor under an Old Testament curse. 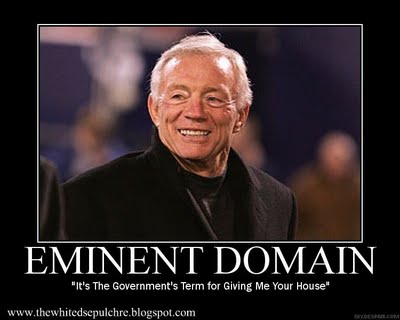 Posted by The Whited Sepulchre at 10:03 AM

This is where I landed after I did a search on Super Bowl 2011 a disaster. I'm still pretty ticked off that Jerry World experienced no rolling black-outs because of public safety issues when my students went through 5 at a high school~as well as the Children's Hospital. Will be a day much like today in H - E (double hockey sticks) that Jerry gets a dime from me. Karma, baby.

I love it when you take my material and write it better. I was so proud of my 'Bad Jerry Juju' phrase...

They warned us about this in The Day After Tomorrow.

Verily I say unto ye sinners all: The fruit of Jerry's loins shall be acursed unto the 5th generation. Only by spilling the blood of a thousand warmista heretics shall the ice-wrath be driven from the land and the carbon god assuaged.

After searching all morning for a literate and concise version of our recent debacle....I met you. Couldn't have said it better!