Have you taken in a Climate Change refugee family?

I have taken in a climate change refugee family of four.  They were driven out of their home in the Mekong Delta because of the flooding from the melting polar ice caps.
We are working to place 8 other families, and I hope you can spread this appeal to everyone on your email list.
In the meantime, please pray for the people in the Southeastern U.S. as they begin abandoning their homes in a quest for higher ground.

Oh.  Wait a minute.  None of that happened.  False alarm.  Chill out.  Never mind.

Back in 2005, the U.N.'s Chicken Little Climate Outfit put out an alarm designed to scare the crap out of everybody living less than half a mile above sea level.  We were going to have 50 million climate refugees by 2010.


Fifty million climate refugees by 2010. Today we find a world of asymmetric development, unsustainable natural resource use, and continued rural and urban poverty. There is general agreement about the current global environmental and development crisis. It is also known that the consequences of these global changes have the most devastating impacts on the poorest, who historically have had limited entitlements and opportunities for growth. 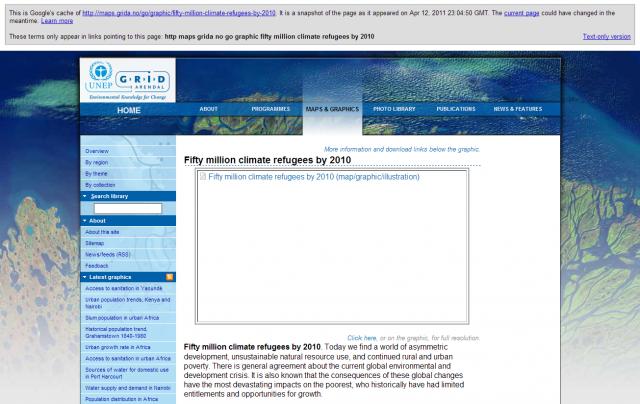 Why the screen shot, instead of a link? Well, the representatives of truth at all costs decided that their predictions were a bit embarrassing and scrubbed the site.  We still have this Inconvenient Truth of a relic thanks to the miracle of Google cache.
The also tried to delete the delightful map that showed which parts of the world would most likely be under water by now.  With that many climatologists leaning all over each other at the U.N., you'd think that one of them would know that this stuff stays out there on the internet forever....

And in the words of Anthony Watts,

And here it is in full-sized hi-resolution glory, suitable for printing, slides, or coffee mugs…wherever it might be appropriate to show the folly of these boneheads. 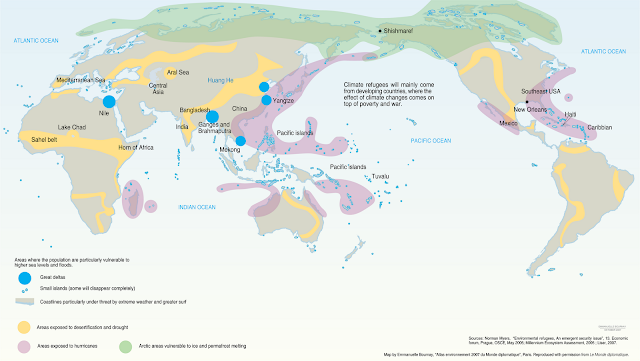 You can hit this link and get a larger version.

I'm emailing this trophy to our graphics department today to have it posterized.  And I'm talking a really huge poster.

This non-crisis is about fund-raising through fear.

It would've been interesting to live with one of those flooded-out refugee families, though.
Posted by The Whited Sepulchre at 7:47 AM

In 2020 I can imagine a scene similar to the "Bring out your Dead!" scene in the Pythons Holy Grail.

Allen, you should not get your information predigested for you. There is a story here but...it's not the one you want to hear.

Every time one of these "Gotcha, Har, Har" stories comes along, you always get suckered into them.
It's a ritual.
They never pan out properly and then you quietly forget about them.
Every single time.
There's no reason to believe that this one isn't going to end up the same way.
You've done nothing in the way of fact-checking at all.

Remember "Climategate"?
Or how about Gerald Dickens?
Or the "paper" by de Freitas McLean, and Carter?
Then there's Lord Monckton. Ah, we should never forget dear old Monckton.
Then there's Mojib Latif.

Do a little digging by yourself.
Ignore Whatsupmybutt and do some independent research.

Are you suggesting this prediction wasn't made? You don't find it odd that a day after an article comes out questioning the lack of fulfilled prophecy, the website vanishes (or tries to vanish?) Are you sure you're the "science is work" chap you claim to be? Or are you stuck in a similar "ghetto" you've accused others of being?"

Are you suggesting this prediction wasn't made?

I'm not "suggesting" anything.

I'm stating in plain English that Allen never does his homework on these "Gotcha" stories. They always go belly-up upon further investigation.

Are you sure you're the "science is work" chap you claim to be?

Yep. And my batting average around here has been perfect so far.

I didn't get conned by the Climategate silliness.
Other people got suckered by the 32,000 scientists meme. I didn't.
Other people believed the idle babble about Virginia Attorney General Ken Cuccinelli and his "investigation". I didn't.

EVERY TIME this broohaa happens, it follows the SAME predictable pattern. A sensationalist story comes out of the Internet that once again (and again and again and again) just somehow proves that "it's all a hoax".

People around here just lap it up.
Nobody ever slows down for half a minute to actually VERIFY something or CHECK the CONTEXT or go to ORIGINAL sources.

Skepticism is a process; not a position.

Cedric,
So why did this thing disappear?

Are they trying to "hide the decline" as in Climategate?

So why did this thing disappear?

The first thing you need to do is ask yourself what is really being claimed.

A more productive approach is to work with actual available evidence.
(And yes, there's more than what you have been spoon-fed)
What do you really have in terms of the actual claim being made?
What is the actual evidence?

Are they trying to "hide the decline" as in Climategate?

Climategate was froth and nonsense.
Climate deniers never bothered to find out what "hide the decline" actually meant.
The phrase was enough.

Look up "appeals to authority".

If you want to claim that I am using an appeal to authority then go ahead.
The trick is to honestly demonstrate it rather that just make glib assertions.

You never do any independent research by yourself. You always get your information from the same narrow band of people that predigest everything for you. Until you start looking at the scientific communities that actually do the work, you will keep going around in circles.

NASA didn't lie to you about the moon landings and they are not lying to you about climate change.
Getting your science information from the likes of Beck and Monckton is a very bad idea.