Why bother with taxes? Why not let Ben Bernanke print all of it?

Why bother with a debt limit?  We've raised it 75 times in the last 50 years.  What does a debt limit do?  Who does it fool?

Which leads to the next point....Why bother with collecting taxes at all?  If we're going to let Ben Bernanke and The Federal Reserve print an arbitrary amount of money at will, why not let him print up a massive $14 trillion dollar batch, bring in some forklifts and shipping containers, load up the entire press run, and send the whole batch to China and get it over with?
Then print another 3 trillion or so to keep the TSA crotch-gropers paid, and the Department of Transportation parasites paid, and the borders of South Korea and Germany and Iraq and Afghanistan and England guarded with our armies.  Let's get it done !!

What kind of finesse about printing money are we attempting?  The Chinese are dumping dollars as fast as they can.  They're not loaning us any more.

Go here for a complete discussion with Mark Steyn. 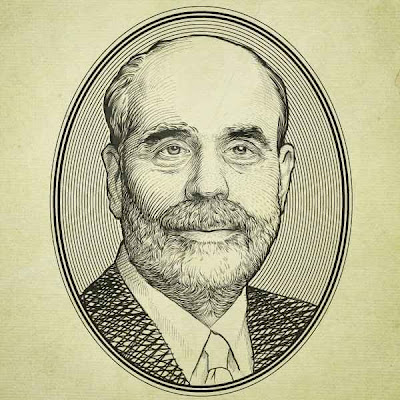 This picture (being developed for a Bernanke Buck) came from Dan McCall's Facebook page.
Posted by The Whited Sepulchre at 2:05 PM