Why is Chinese Communism producing better results than Indian Democracy?

Democracy is two wolves and a lamb voting on what to have for dinner. - James Blovard

Marvel Variants just got back from a trip to India and China.  He claims it was a work-related trip, but we never really know.
He came to our production meeting Friday and said that leaving India and entering China was like re-entering civilization.  Comparing the two places almost made Mr. Variants question the benefits of democracy.  (India is a democracy, China is not.) 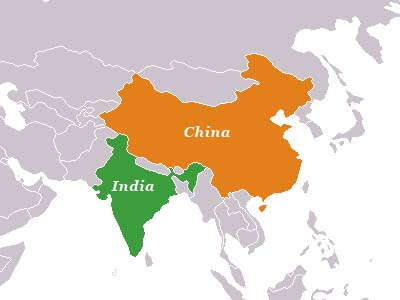 So is democracy enough to guarantee prosperity?  Not no, but hell no.

Hitler was elected by a democracy of sorts.  So was the economy-wrecking, depression-lengthening, agency-spawning FDR.

But why is India such a goofy, bass-ackwards place if the citizenry are more-or-less free to control their own destinies?
Why have you never seen a picture of the Indian skyline?  (Short answer: India's electrical grid is so erratic, nobody trusts an elevator.  Therefore, nobody builds tall structures.)

There's only one website that will explain this properly.  And that's the Index Of Economic Freedom, put out by the Heritage Foundation every year.  Here's an explanation of how the index works:

How do you measure economic freedom?


So where are India and China on the index?
Out of the 179 economies open enough to be analyzed, India is 124th and China is 135th.  That's not much difference.
But how could a democracy remain in such a low position? Does India really have less economic freedom than freakin' Egypt (96th) or Uganda (80th) ????

How could a place where people control their own destiny remain so screwed up?

Well, here are some details, all from the Freedom Index:

Despite the challenging global economic environment, the Indian economy has recorded average annual growth of around 8 percent over the past five years, propelled by domestic demand and continuing strength in services and manufacturing.


However, growth is not deeply rooted in policies that support economic freedom. Progress with market-oriented reforms has been uneven. The state maintains an extensive presence in many areas, playing a major role through many public-sector enterprises. India’s restrictive and burdensome regulatory environment discourages broader private-sector growth and hampers realization of the economy’s full potential. Corruption remains significant, and the judicial system remains inefficient. Increasing inflationary pressure poses a major risk to overall macroeconomic stability.

Ok, you could say the same thing about Virginia or South Dakota.  What else would be enough to make Marvel Variants want to kiss the ground in a Shanghai airport?

Here are the difficulties faced by an Indian entrepreneur, point by point:

Business Freedom: Potential entrepreneurs face severe challenges. The regu­latory framework is burdensome, and the legal framework is weak. It can take almost 200 days to obtain a construction permit.

Fiscal Freedom:  India’s tax rates are relatively high. The top income tax is now 30.9 percent (30 percent plus an educational assessment of up to 3 percent). The top corporate tax rate is 33.99 percent (30 percent plus a 10 percent surcharge and a 3 percent education tax on that total). Other taxes include a dividend distribution tax, a tax on interest, and a value-added tax (VAT). A general sales tax (GST) was recently approved to replace the VAT. In the most recent year, overall tax revenue as a percentage of GDP was 18.6 percent.

(Notice how they can't take in more than 20% of GDP, no matter how high they put the rates?  Ever wonder when Obama is going to figure that out?)

Government Spending:  The government still plays a central role in the economy. In the most recent year, total government expenditures, including consumption and transfer payments, fell slightly to 27.2 percent of GDP. Public debt is 78 percent of GDP.

Monetary Freedom:  Inflation has been relatively high, averaging 9.9 percent between 2007 and 2009, and was running above 11 percent in 2010. The government subsidizes agricultural, gas, and kerosene production; applies factory, wholesale, and retail price controls on “essential” commodities, 25 crops, services, electricity, water, some petroleum products, and certain types of coal; and controls the prices of 74 bulk drugs that cover 40 percent of the market. Domestic price and marketing arrangements apply to commodities like sugar and certain cereals.

(Our true rate of inflation is closer to 10% than Bernanke will admit.  When I started writing this post, I had no intention of pointing out how the U.S. was headed in India's direction.  Looks like we're going there, doesn't it?)

Investment Freedom:  Foreign investment is prohibited in some industries and capped in others. Foreign investment in real estate is limited to company property used to do business and the development of some types of new commercial and residential properties. Bureaucracy is non-transparent and burdensome, and contract enforcement can be difficult. Foreign exchange, capital transactions, and some credit operations are subject to approvals, restrictions, and additional requirements.

Financial Freedom:  Too tiresome to quote in full, but here's the kicker:  The government has introduced new financial instruments including derivatives.

Property Rights:  Transfers of land are restricted, and there is no reliable system for recording secured interests in property. Courts take years to reach decisions, and foreign corporations often resort to international arbitration. Protection of intellectual property rights is problematic. Proprietary test results and other data about patented products submitted to the government by foreign pharmaceutical companies have been used by domestic companies without legal penalties.

Freedom From Corruption:  Corruption is perceived as significant, especially in government procurement of telecommunications, power, and defense contracts. India ranks 84th out of 180 countries in Transparency International’s Corruption Perceptions Index for 2009. Corruption is viewed as an obstacle to foreign direct investment.

Labor Freedom:  India’s labor regulatory framework is evolving. The non-salary cost of employing a worker is moderate, but dismissing an employee is costly. The informal economy (working off the books) is an important source of employment.

There you have it.  India, a democratic nation, is one of the most screwed-up places on earth.  Most of the voters probably favor protectionism, high tariffs, the occasional kickback, an "Indians First" investment policy, subsidies, and everything else you'll find under the Big Government Christmas Tree.

So what's the solution?

Enforcement of property rights.  Free trade.  Elimination of subsidies.  Enough government to provide a working courts system and to defend India's borders, but not much else.

In other words, the platform of The Libertarian Party.  Please consider Libertarian candidates in the 2012 elections.  After all, the U.S. is only #9 on the Freedom Index, and we're falling fast.

Map came from here.
Posted by The Whited Sepulchre at 8:51 PM