John Bryson doesn't need to have seizures to do harm

Republicans are offering silent prayers to the ghost of Ronald Reagan, asking that he please, please, please give them a way to prove that Bryson was drunk.
Democrats are getting indignant because someone at a Karl Rove SuperPac tweeted something snarky about "how do you have 3 crashes in 5 minutes without alcohol not being involved?"

Look, the man had some car wrecks on Saturday.  But he's been known to have seizures.  Four years ago, he apparently passed out in a board meeting and had to be hospitalized. 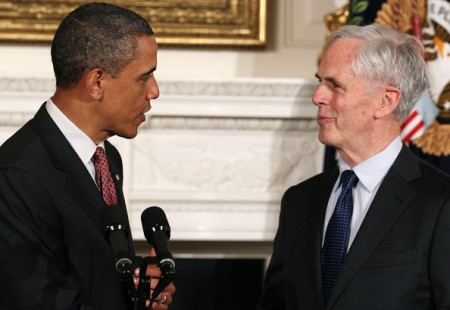 It looks he was only in two car wrecks this weekend and chances are the total damage was $15,000.00 or less.

But drunk or not drunk, stable or having seizures, stoned or straight, car wrecks aren't why John Bryson should be making the news.  Check out Bryson's requests for spending increases from the Department Of Commerce website:

•Increasing U.S. Exports: $517 million for the International Trade Administration (ITA), including several key initiatives. The Administration requests $30 million for critical investments in trade promotion to help more U.S. businesses reach the 95 percent of consumers who live outside our borders. This proposal also includes $30 million to send Foreign Commercial Service Officers and locally engaged staff to high-growth markets to help support the National Export Initiative to meet the President’s goal of doubling U.S. exports by the end of 2014. The budget also supports a new trade enforcement unit-- the Interagency Trade Enforcement Center (ITEC), which will significantly enhance the Administration’s capabilities to aggressively challenge unfair trade practices around the world (details below).

•Attracting Investment to the U.S.: The $517M for ITA includes $13 million for SelectUSA to encourage, facilitate, and accelerate foreign direct investment in the U.S. to create jobs and spur growth.

God help us all.  I work for a manufacturing company, and Obama's Commerce Secretary wants more funding so he can help manufacturers.  Oh sweet baby Jesus help us all.  Please keep my family in your prayers.  Those folks have a worse financial record than Ed McMahon.

*Additionally, as part of the Administration’s efforts to revitalize manufacturing, the President’s budget proposes $1 billion in mandatory funding to establish a National Network for Manufacturing Innovation (NNMI). Through collaboration between NIST, the Department of Defense, the Department of Energy, and the National Science Foundation, the NNMI aims to promote the development of manufacturing technologies with broad applications.

*When it comes to trade enforcement, as part of the President’s plan to level the playing field for American workers and businesses, the President’s budget will invest $26 million in ITA ($24M) and the Office of the U.S. Trade Representative ($2M) to support a new trade enforcement unit-- the Interagency Trade Enforcement Center (ITEC), which will significantly enhance the Administration’s capabilities to aggressively challenge unfair trade practices around the world, including in China. The ITEC will represent a more aggressive “whole-of-government” approach to addressing unfair trade practices, and will serve as the primary forum within the federal government for executive departments and agencies to coordinate enforcement of international and domestic trade rules.

They pay people to write that drivel.  With your money.  Taken by force.  I know you don't have time to read thast stuff, but they're asking for more money so they can help you get more money to give to them.
Here's Assistant Commerce Secretary Michael Camunez, writing about a border boondoggle that ate up a couple of his action-filled weeks:


At each stop, stakeholders repeated the theme that we—government and business—must work together to change the narrative about the border. The goal is not to diminish awareness of the fact that real security challenges exist; rather, we need to increase awareness that there is more to the border story. Both countries are critical to the economy of the other, and one of our goals for this trip was to highlight the fact that new commercial opportunities exist and that the border serves a critical role in facilitating the essential flow of goods and people between Mexico and the U.S.


Our delegation consisted of U.S. and Mexico government officials and members of the U.S. Chamber of Commerce. We conducted stakeholder outreach events related to the border trade facilitation efforts under the U.S.-Mexico 21st Century Border Management initiative, which was established by Presidents Obama and Calderon in May 2010 as a vehicle to develop and promote a more secure and seamless border between our two countries. These events provided us with an opportunity to share information with stakeholders about the ongoing work and accomplishments of the initiative and to receive important, on-the-ground feedback from them, which can be incorporated into the 21st Century Border Management work streams.

Facilitating initiatives for stakeholder feedback within work streams outreach for increased awareness of changing narratives for an overview of the critical role of the infrastructure's ability to provide feedback for an increased level of dialogue for....

Hell, if you can read two consecutive sentences of that theft-funded drivel without throwing up in your mouth just a little bit, you're a better man than me.

What's more offensive?  That John Bryson's assistant, Michael C. Camunez,  was paid to write that stuff, or that he's probably next in line to spend the Commerce Department's loot if John Bryson keeps running into cars?

Let's keep this incident in perspective, folks.  Bryson may have done $15,000 damage on Saturday.  That's nothing compared to the damage he's done since 2008.

Shut down the Department Of Commerce.  Fold the weather forecasting functions into the Air Force.  Knock down their headquarters building.  Hell, turn John Bryson loose, and let him knock down the building.
Posted by The Whited Sepulchre at 7:21 PM

Agree with all you say.

I still think Bryson's driving should remain an issue. Even if seizures were to blame, why does a man with a history of seizures even have a license?

Many senior citizens should not have licenses, but let a politician try taking those away.