On Chick-Fil-A and chickens

It seems like the internet, the Tweetosphere, Facebook, and the pitiful remnants of the print media are all a-clucking about Chick-Fil-A.
Dan Cathy, Chick-Fil-A's CEO, in addition to supporting some anti-gay and lesbian organizations, made the following comments to the Baptist Press:


Some have opposed the company's support of the traditional family. "Well, guilty as charged," said Cathy when asked about the company's position.

"We operate as a family business ... our restaurants are typically led by families; some are single. We want to do anything we possibly can to strengthen families. We are very much committed to that," Cathy emphasized.

Blah, Blah, Blah, blah, and blah.  If Dan Cathy wants to give money to a group called Gods And Ghosts and Goblins Against Gays, that's his business. If customers want to avoid his business because of it, more power to them.  That's their business, right?

Here's what I don't understand.....How is it that the Leftosphere is going totally batshit against a Chicken Restaurant for their anti-gay stance WHEN THAT IS THE EXACT SAME POLICY HELD BY BARACK FREAKIN' OBAMA TWO MONTHS AGO ?????

Where was the outrage?  Why didn't lefties, liberals and the rest of the Great Herd Of Independent Minds decide to boycott the Democrat Party?  Why were the Libertarians the only ones standing up for Gay/Lesbian equality???

Hell's Bells, I'm a freakin' Shipping Manager and Freight Broker.  But I had balls enough to publish this in the Fort Worth Star-Telegram back when Barack Obama was still "evolving".
Was it easy? No.
Did I take a lot of crap because of it?  Yes.
So why couldn't The Teleprompter Jesus do the same thing until the day after North Carolina voted on their anti-gay/lesbian marriage referendum?

It's because he's a physical and moral coward.  (Hit that link.  He flip-flops around like a catfish on the lake bank.)

Barack Obama is a chicken.


Asked if he was the best candidate on gay marriage, Johnson said "There's no question unabashedly let's have marriage equality now, gay rights are constitutionally guaranteed."

End of rant.
The picture of our president in a chicken suit came from here. 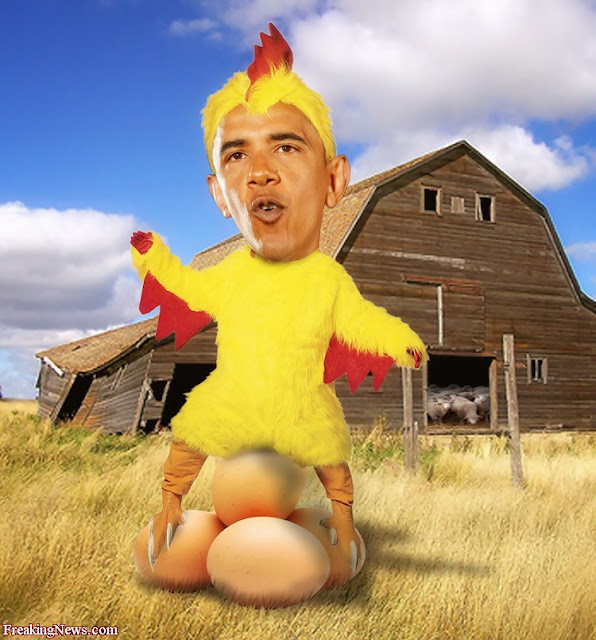 Posted by The Whited Sepulchre at 5:17 PM

On one hand, we have a right-wing religious bigot in charge of a large corporation repeatedly making anti-gay pronouncements. On another we have the Libertarians, who pay lip-service to gay rights. Perfect setting for you to toss your usual blah-blah and for once take a stand against a rich reactionary, and what happpens?

You instead decide to rag on Obama.

All he said, in response to a loaded question, was that he was in favor of 'traditional' marriage. From where I sit, this is a no-big-deal.

If you don't like it, don't patronize Chick-Fil-A. But at least you know where he stands. His position is not 'evolving' like the flip-flop-in-chief.

And since when does favoring a traditional man-woman marriage make one a "right-wing religious bigot?" Isn't that a pretty judgmental position to take?

I happen to prefer a traditional man-woman marriage, but I also don't care who sleeps with who.

Civil unions, yes. Marriages, no. That's the business of whatever church you happen to belong to.

IMO you're way off base on this one.

Sorry if I seem off-base; the subject is an important one to me. I'll leave it at that.

I absolutely agree with your statement that the government has no business ruling on who is married to who and no business telling churches who should or should not marry who.

But I gotta say, when I hear the phrase "traditional" and "values" in the same sentence, the hair on the back of my neck stands up.

Alarmist and off-base? Maybe. But given how that language has been used in the recent past, I get a little jumpy when I read it.

Many politicians' beliefs about race evolved from views held in the 1950's and 60's. Let's hope more continue to evolve around gender and sexual preferences.

"...when I hear the phrase "traditional" and "values" in the same sentence, the hair on the back of my neck stands up...[G]iven how that language has been used in the recent past, I get a little jumpy when I read it."

Is the reason for this that the good comrade Doctor can cite some instances of dire results from uttering such objectionable words; or is it simply the knee-jerk reaction of a collectivist wishing to silence those with whom he happens to disagree?

Absent the recent intervention of the state in what was once a religious contract, the issue would be moot. I, for one couldn't care less if some nutcase wished to "marry" his/her pet rock. The rub is when the socialist programs of the state transfer wealth seized from taxpayers to "legal" successors in interest.

Dr. Ralph,
The Libertarians will be participating the Alan Ross Gay/Lesbian Pride parade in Dallas this year. I'll share details as the date approaches. You're welcome to help with the float and/or march with us.

Ditto for everybody else.

However, I stand by the point I was trying to make in the post. Where was the outrage over Obama taking the exact same position? Until Democrats stop worrying about giving moral victories to the Republicrats and start opposing wars, bailouts, Tarps, Corporate Cronyism, and prohibition, they're going to keep getting more of the same.

In support of Allen's point:

"I believe marriage is between a man and a woman. I am not in favor of gay marriage."

As for Dan Cathy and Chick-Fil-A, here's what
he actually said.

Some have opposed the company's support of the traditional family. "Well, guilty as charged," said Cathy when asked about the company's position.

Here's how CNN reported it:

“Guilty as charged,”, Cathy said when asked about his company’s support of the traditional family unit as opposed to gay marriage.

Nowhere in the original interview do the words "gay" or "anti-gay" or "gay marriage" appear. CNN inserted the phrase "as opposed to gay marriage" that has caused all the ruckus.

Please note I'm not an advocate of Dan Cathy's evangelism. I don't care who does what with who (or is it whom? Anyway...)

But I do find it troubling that Obama et al. get a free pass on things like this while the other side gets excoriated for saying much the same thing. And I find it extremely troubling that a 'news' organization like CNN (and others) get away crap like this.

And I go out of my freaking mind when loons like Rahm Emanuel act like tinhorn third world dictators and ban businesses from their fiefdoms because they disagree with the religion, or the politics, or whatever of the owners.

What if the mayor of Ft. Worth decided to ban a business because it was owned by a Muslim? People would go ballistic - and rightly so.

Sorry, I didn't mean to rant. But hypocrisy, blatant disregard for the truth, and self-righteous assholes (on both sides) just rile the heck out of me.

WS - keep me updated on the when and where of the Dallas Pride Parade.

Tim - given the nature of coded language in our modern times, I don't think it was much of a stretch for CNN to assume Cathy's stated support for "Traditional"and the"biblical-definition" of marriage certainly meant "as opposed to gay marriage." I don't see what other possible interpretation one could take away.

On the other hand, I think the Boston/Chicago mayors' reaction is clearly showboating but then the worst abuses of government power take place at the local level, right?

Hey Doc - I hope you don't take any of this personally, because for the most part I'm on your side. Really.

But here's where I have a problem. You mentioned "the nature of coded language in our modern times." I would argue that decoding that language depends on one's personal background, experiences, and perspective.

For example, when I hear "traditional values" I don't interpret that as opposed to gay marriage. I interpret it as a preference for 'traditional' marriage (i.e., one man, one woman). I might prefer vanilla ice cream to chocolate, but I don't want to ban chocolate ice cream, or prevent anyone else from eating it.

(Another example: one of my wife's late mother's favorite words was "gay." She would talk about going on a picnic or to a party and having a gay time, and never could understand why everyone giggled.)

But that's really just a minor point that reasonable people can clear up through a reasonable discussion. The bigger problem is when an alleged news organization like CNN puts its own interpretation or spin on a loaded term like "traditional marriage." CNN could also have said "as opposed to polygamy." IMO CNN and every other news service shouldn't 'assume' what people mean. They should just report what is said, without assumption or interpretation.

An unreasonable hope, I know, especially in these times.

And Allen, I apologize for hijacking this thread. It's just that interpretive news reporting is one of my hot buttons.

Tim - I wouldn't hang around here if I took this stuff personally.

I've found we both agree on much more than either of us would have initially thought. It's a funny old world.

For example, I wholeheartedly agree with your statement that decoding language depends on one's personal background, experiences, and perspective - It absolutely does.

If we differ, (and we may not) it's that I think there are occasions where people use that to communicate one message to their like-minded peers while flying under the radar of everyone else. And the practice is done by people of many political persuasions. Heck, even Jesus did it in the Bible (the Book of Revelations comes to mind).

Now I don't know if Mr Cathy was being disingenuous or clever or guileless in his language or not.

I do know it sounded a whole lot like language used by supporters of Prop 8 in California, so if CNN jumped to a conclusion, in my mind it wasn't much of a leap. I guess it *could* have been a coded anti-Mormon message (that polygamy thing you mentioned), but that seems less likely.

Just to steer this belatedly back to the WS's original topic, there *are* times where Obama has been a bitter disappointment to me on a number of issues, and his earlier position on same-sex marriage is one of them. But what some are calling flip-flopping I call evolving. Better late than never.