Gary Johnson is unimpressed with Paul Ryan.  Here's Mr. Quinn's conversation with Johnson on the danger of Republicans in Libertarian clothing:

Gary Johnson is not happy that some in the media call Republican vice presidential candidate and Wisconsin Congressman Paul Ryan a libertarian.

Johnson, the Libertarian Party nominee for president, noted that Ryan was a strict social conservative that voted to restrict abortion rights and against marriage equality.

“Paul Ryan submitted personhood legislation that is anything but libertarian,” he said. Johnson's eyes widened and his volume increased as he went into detail about Ryan’s support for a national version of Virginia’s controversial transvaginal ultrasound law.

Yeah.  Can you imagine the interest your grandkids will be paying on a budget that's not balanced for another 30 years???

Also, if you hit the link at the top, you'll see that the pic from the interview isn't from Johnson's appearance at Hill's Cafe in Austin, but from Fort Worth's own Joe T. Garcia's restaurant, where the Tarrant County Libertarian Party held a fundraise/rally. 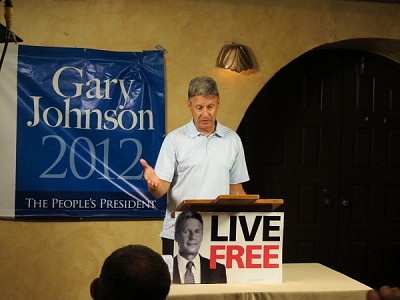 Posted by The Whited Sepulchre at 8:41 AM

Good thing for Ryan. If he was a libertarian, he'd get as many votes as Gary Johnson will.

Do you want Gary Johnson to be your president? http://celebrity-plugs.com/t/