Why We Can't Shrink Our Government, by a failed Obama economist

Three and a half years ago, the media was drooling over the geniuses Barack Obama had appointed to turn around the economy - Peter Orszag, Christina Romer, Larry Summers, Timothy Geithner, and Jared Bernstein. 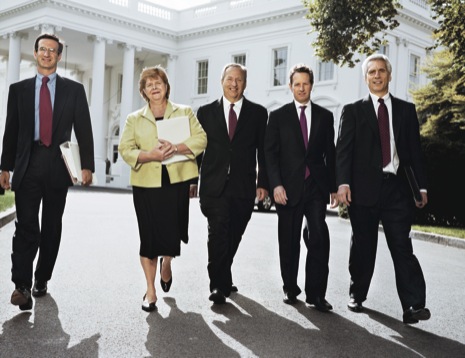 All but Geithner have now resigned, probably because the populace is about to figure out the con game that  Orszag, Romer, Summers, Geithner, and Bernstein have pulled on them.

These jokers backed some semi-trailers up to the Treasury and looted the place.  In a less sheep-like society, the mobs with tar and feathers would've already surrounded their homes.

One member of this crew, Larry Summers, has taken to the pages of The Washington Post to try to justify another couple of decades of looting.   His article is called The Reality Of Trying To Shrink Government.

Summers says that we won't be shrinking the size of government, or our debt, anytime soon. Here's a summary of his argument:

1) We're living longer than the brain trust that invented Social Security anticipated.  In the near future, the number of people on Medicare, Medicaid, and Social Security is going to explode.  (Everyone has seen this coming, but nobody has done anything about it.  This is a good case for smaller government.)

2)  The interest on the national debt is far bigger than anticipated.  It's going to consume 3.2% of our GDP by the year 2020.  (Everyone has seen this coming, but nobody has done anything about it.  This is a good case for smaller government.)

3)  Here's the funny one, the one where Summers goes Full Obama Retard on us.  Things that government purchases cost more than things that the private sector purchases !!!  Here's a terrifying glimpse into the mind of a Statist:


Third, increases in the price of what the federal government buys relative to what the private sector buys will inevitably raise the cost of state involvement in the economy. Since the early 1980s the price of hospital care and higher education has risen fivefold relative to the price of cars and clothing, and more than a hundredfold relative to the price of televisions. Similarly, the complexity, and hence the cost, of everything from scientific research to regulating banks rises faster than overall inflation. These shifts reflect long-running trends in globalization and technology. If government is to continue providing the same level of these services, government spending as a share of the economy has to rise, by at least 3 percent of GDP.

It's almost impossible to write something that stupid without having gone to an Ivy League University for practice.

Do you know why the price of TV's and clothing has dropped like a stone, while the price of healthcare and education has gone into the stratosphere?

It's because TV and T-shirts are relatively unregulated, and the government, for the most part, stays out of the TV and T-shirt industries.  Jesus Christ Almighty, get a freakin' clue !!  Read some Milton Friedman or some Thomas Sowell or some Henry Hazlitt, or any other reality-based economist.  Subsidies and regulations drive up prices.  Prices are high for healthcare and education BECAUSE the government helps pay for them.  (Everyone has seen this coming, but nobody has done anything about it. This is a good case for smaller government.)

Summers goes on to make a few other lame points.  (The one about how we can't reduce defense spending is also a real knee-slapper.  We're responsible for 45% of the world's defense spending.)

That's all he had to say.

Anyone who finished middle school could go into D.C. and cut the staff and the spending by 50% with no loss of services that wouldn't immediately be taken over by the private sector at a much lower cost.

Read his whole article.  Or Stephen King's Pet Sematary.  They're equally scary.
Posted by The Whited Sepulchre at 7:16 AM