Barack Obama has received our petition to secede

All of the post-election secession talk that's been going around disturbs me.
We've got a great constitution in the U.S.  It's the greatest idea for a country ever, an idea the could be summed up as "leave everyone alone".
We just need government to stick to the limits of the constitution, get the spending under control, and we really, really could come out of this mess intact.
(Unfortunately, we now have to come up with $16,000,000,000,000.00 before we rise back up to the debt level of a homeless wino.  It could happen...?)

A Statist with time on her hands (Dianne Self Wing?) recently composed this satire of a "Goodbye Letter" from Barack Obama to the Great State Of Texas.

Rather than being funny, it's a terrifying glimpse into the mind of a Nanny State victim. 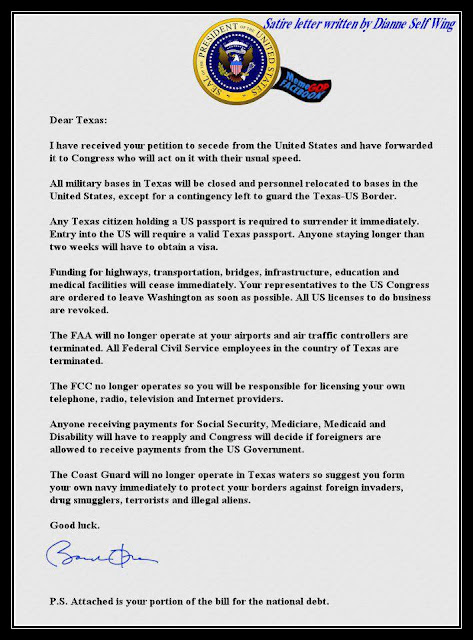 1)  All military bases in Texas will be closed....
You promise?  We won't have to pay for any more bloated military???  No standing army/navy/air force/marine groups going off to kill babies in the Middle East?  We could keep an army about the size of, say, Brazil's and do just fine.  More money in our pockets instead of Lockheed's.

2)  They're going to revoke our passports.
We'll have to get a passport if we want to see Texas A&M play a Southeast Conference "away" game, or visit a debt-laden Blue State.  Yawn.

3)  The Feds are going to revoke our highway and infrastructure funding.
Wait, let me rephrase that....  We won't have to send money to Washington, let them take a huge cut off the top, and then get a little bit of it back.  I don't see a downside yet, do you?

5)  The FCC will no longer be able to grant regional monopolies to Clear Channel.

6)  Anyone receiving payments for Social Security, Medicare, Medicaid and Disability will have to re-apply.
There is no longer such a thing as Social Security, Medicare, or Medicaid.  In a real world accounting system, they're bankrupt.  There's nothing there.  It's been spent.  Disability payments are another story.  These suddenly skyrocketed during Obama's 3rd year, and at one point the number of people filing for disability payments exceeded the number of people who found jobs.  This will be a good opportunity for Texas to determine who is really disabled, right?

7)  Goodbye to the U.S. Coast Guard.
Well, we don't fear drug smugglers in Texas.  More and more of us favor legalization.  Plus, if we're no longer going to be associated with Barack's Brigades who are going around the world blowing up other people's stuff, the need for a massive Navy/Coast Guard is going to drop off.  This'll be a good break for Texas.  But I suspect we'll have to put a border fence between ourselves and Oklahoma.  And Louisiana.  And New Mexico.

8)  Thanks for giving us an opportunity to start paying the national debt now, instead of decades from now.

Can you believe that this is the best someone could do?  There are so many great, great things about being associated with the USA.  But all that Dianne Self Wing could list were armies, busted programs, bureaucracies, and debts.  In other words, the Bush/Obama legacy.

Kinda sad.
Posted by The Whited Sepulchre at 8:48 AM

I think that the $275 billion dollars in federal tax revenue that we pay in will cover what ever we need to cover.
Sincerly Texas!

There actually ARE great, great things about being associated with the USA. Unfortunately Texas isn't one of them.

And I can't believe your (laughably) serious responses to an obviously over the top letter were the best YOU could do. (You don't fear drug smugglers... in TEXAS? REALLY!?)

The letter was funny but your responses were hilarious... probably not in the way you intended but... you are hilariously ridiculous...

No, Texas has nothing to fear from Drug Smugglers. We have more to fear from Narcs, No-Knock Drug Raids, a runaway public school to prison pipeline, and massive debt.

I liked that someone also submitted a petition requesting that Austin be allowed to secede from Texas. I guess the great nation of Texas will need to relocate its Capitol. May I suggest College Station?

Probably done by the same genius (or at least a close blood relation) that started the petition to have The Child Who Would Be President issue an executive order to revoke the citizenship of anyone who had signed a secession petition.

But....Doctor,
Where would the taxpayers go to have their money taken away????
(The lefties keep acting like we would miss the bureaucracies, TxDOT, DMV, RR Commission, pitiful school system, university monopolies, etc.)
Amazing.