There's been a little storm "brewing" (LOL) on the internet about whether Jimmy Carter's deregulation of the beer industry led to the incredible diversity of brew that we now have in the USA.

There may have been 5 or 6 varieties of beer in the convenience stores of my youth.

Fifty year later, the typical Stop'n'Shop now carries about 75 varieties of beer, most of which you've never heard of. 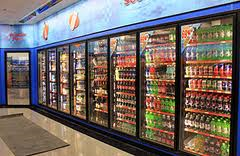 
If you’re a fan of craft beer and microbreweries as opposed to say Bud Light or Coors, you should say a little thank you to Jimmy Carter. Carter could very well be the hero of International Beer Day.
To make a long story short, prohibition led to the dismantling of many small breweries around the nation. When prohibition was lifted, government tightly regulated the market, and small scale producers were essentially shut out of the beer market altogether. Regulations imposed at the time greatly benefited the large beer makers. In 1979, Carter deregulated the beer industry, opening the market back up to craft brewers. As the chart below illustrates, this had a really amazing effect on the beer industry: 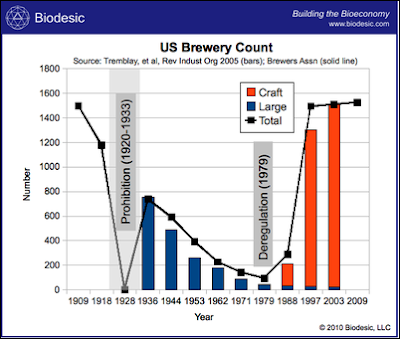 Good stuff, right?  We deregulated, little guys brought competition to the marketplace, and a plethora of brews were brought to a thirsty public. 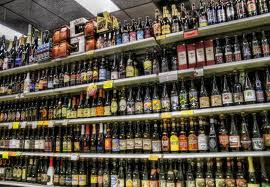 Here's what Reason magazine had to say on the subject:


I personally find it particularly meaningful that government and industry and (I presume) anti-drinking scolds colluded to criminalize a behavior that wasn't just victimless, but downright awesome; and that the removal of that appalling bit of illiberal nannyism helped usher in a phenomenon I would have bet the house against two decades ago: a thriving and variegated American industry of delicious beermaking.
And given that, what's wrong with making deregulation a "starting point"? (A concern of the original article) Imagine for a crazy moment a world in which the default expectation would be for government not to flop its grotesque belly onto the forehead of various industries, not to meddle in the affairs of pre-pubescent drink vendors, not to redistribute $20 billion a year (give or take) of our money to mostly well-heeled agriculture companies just to make sure they don't face competition from poor people. I'm not talking about no regulation here, but rather the idea that if such-and-such activity isn't hurting anybody it shouldn't be subject to governmental micro-managing, license-imposing, winner-picking, and even arrest.
One of the common misconceptions about libertarian enthusiasm for deregulation is that it's some kind of (presumably paid-for) philosophical cover for wanting the very richest Corporates to be even richer. Speaking as a libertarded conspiracy of one, my favorite bedtime deregulation stories are about stuff like beer, air travel, and talking about politics on radio and TV, where after you lifted restrictions that in retrospect sound like they came from another planet, people do what the normally do when left alone—create all kinds of interesting new artifacts, businesses, and even ways of life. Regulations so often piss me off because they so often fall disproportionately on the backs of the little guy, while the big guy—even/especially the one whose misconduct precipitated the regulation in the first place—walks off with a well-lobbied exemption. Generally speaking, the fewer activities are illegal, the freer us opposable-thumbs types are.

Damn.  I wish I'd written that! 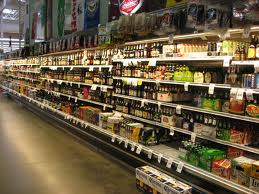 After publishing some of these findings about Jimmy Carter's involvement in the beer boom, James Fallows had to issue an in absentia retraction for Mr. Kain, based on the research of a reader namedTom Hilton:


While I have immense admiration for President Carter, and would love to see him get the credit he deserves for all sorts of things (and who knows; now that Obama has officially supplanted him as History's Greatest Monster, maybe he will), but E. D. Kain's claim that Carter "deregulated the beer industry" (in Kain's words) is grossly inaccurate. What Carter did sign was HR 1337, which legalized homebrewing "for personal or family use, and not for sale"--'deregulating' individual, not commercial, behavior. The legalization of homebrewing did contribute to the growth of the craft beer industry (according to Charlie Papazian, 90% of the pioneer craft brewers started out making homebrew), so President Carter certainly deserves credit for that...but it just as certainly isn't "beer industry" deregulation.
IMO, the step that really touched off the craft beer explosion was the legalization of brewpubs in various states--WA and CA in 1982, OR in 1983, with others following shortly thereafter. This is consistent with the graph, which shows a leap in numbers from 1979 to 1989 (meaning the growth could have started at any point during that decade); according to the American Brewers Association, the low point was 1982, meaning the turnaround actually began in 1983 (not 1979). Also: of the 1500 breweries in existence today, 2/3 are or began as brewpubs.

That would change everything, wouldn't it?  There's a huge difference between homebrewing and operating a brewpub and operating a full-blown distillery.
So Eric Kain, who started the discussion, jumped back in.


Your reader is quibbling over the definition of deregulation. Removing a barrier to entry to any market is an act of deregulation whether or not access to the market is direct or indirect.

If, for instance, people were not allowed to bake their own bread without a license from the government and strict adherence to a number of regulations, then this would effectively crowd out a lot of people who would otherwise become bakers. One doesn't need to legalize the sale of home baked bread in order to deregulate the bread market, they simply need to legalize the baking itself which provides people with basic access to the craft as well as to the supplies necessary to pursue that craft. Likewise, regulating away home bakers would also crowd out a lot of suppliers who would otherwise provide baking goods and information to home bakers. Soon only bakeries with access to lots of cash and influence would have any market share at all, regardless of whether or not smaller bakeries were legal.

The same phenomenon applies to home brewing. In the pre-Carter days there was little or no access to home brewing supplies, very little knowledge base for do-it-yourselfers to draw from, and far less experimentation with home brewing, making it effectively impossible to gain entry to the beer market for non-corporate brewers. Carter's deregulation essentially stripped away all these barriers to entry, making it possible for a number of people who would otherwise not have entered the market to do so. Did deregulation of brewpubs also help lead to the craft beer explosion? Certainly. But as your reader notes, 90% of craft beers began as home brews. Without Carter's deregulation, the brewpubs themselves would never have taken off. 90% of the craft brews we now have would never have existed. Even if this didn't allow home brewers to directly sell their beer in the wider market, it allowed them to gain the skills and information necessary to do so.

Removing these barriers to entry can rightly be understood as deregulating the beer industry. It's just semantics to suggest otherwise.

My head is starting to hurt from trying to figure this out.

Here's what I do know.  Somewhere, based on this Tempest In A Brewpot, the deregulation of the beer industry brought diversity and competition to the market.  The same thing happened in the airline industry, the deregulation of my own trucking industry, and in every other area where nanny-staters, busybodies and other parasites have decided to get the hell out of your way.  And Jimmy Carter had something to do with it. 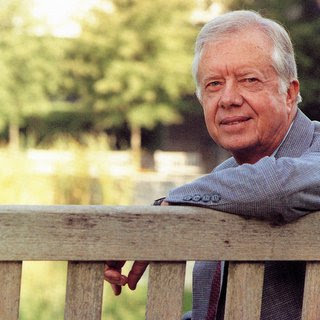 The guy is still alive, you know, but nobody will ask him exactly what happened because once he starts talking he doesn't stop.

Freedom is good.  As long as you're not hurting anyone else, your freedom is a good thing.  Heck, it's a great thing.  It's the most undervalued asset on this planet.  Nobody planned on me being able to drink a Shiner in a East Fort Worth bar this afternoon.  There is no beer czar.  Therefore, the beer industry isn't screwed up.

We do have a Drug Czar, an Education Czar, and for all practical purposes, a Healthcare Czar, and therefore those industries are as f***ed up as a soup sandwich.

Let's deregulate healthcare and education.  We have no idea who will step in to make us happy for less money.  And in the meantime, raise a Shiner Bock in praise of Jimmy Carter, and thank the gods that we don't have a beer czar.

Posted by The Whited Sepulchre at 3:19 PM

Things Jimmy did wrong
most everything else
including creating FEMA

Nah. He also deregulated trucking and the airlines.
I'm not saying that justified his other screwuppery, but he deserves credit for those three.

To paraphrase W.C. Fields, Jimmy Carter drove me to drink. It's the one thing I'm indebted to him for.