There's been a lot of rejoicing amongst my pot-smoking friends because of Attorney General Eric Holder's decision not to enforce some of the existing marijuana possession laws.

I take an opposite view.

"Prosecutorial Discretion" works like this: You want to build a warehouse.  The government inspector in charge of plumbing finds that your contractor has violated some bullshit rule about plumbing.  The inspector agrees that it's a bullshit rule, and he ok's pouring a bunch of concrete on top of the pipes and drains that make up the plumbing system.  But he always, always, always makes a note that your plumbing broke the law.

At that point, he owns you.  If you raise hell with City Hall about anything for the rest of your life, or if you contribute to the mayor's opponent, or if you want to simply fight some other ridiculous law,the plumbing inspector can waltz in and insist that your rip up the concrete in your warehouse and repair the plumbing that isn't up to code.

The same thing happens with those possessing marijuana.  They let you slide with small amounts, but they make note of it.  You have broken the law.  You think that you're ok with The Man, but you aren't.  Not even close.  The next time you try to fight a zoning ordinance, protest a war too loudly, or run for office, they've got you.  You were found to be in possession of an illegal amount of marijuana.

Here's one of Ayn Rand's villains in "Atlas Shrugged" explaining the concept:


"Did you really think we want those laws observed?" said Dr. Ferris. We want them to be broken. You'd better get it straight that it's not a bunch of boy scouts you're up against... We're after power and we mean it... There's no way to rule innocent men. The only power any government has is the power to crack down on criminals. Well, when there aren't enough criminals one makes them. One declares so many things to be a crime that it becomes impossible for men to live without breaking laws. Who wants a nation of law-abiding citizens? What's there in that for anyone? But just pass the kind of laws that can neither be observed nor enforced or objectively interpreted – and you create a nation of law-breakers – and then you cash in on guilt. Now that's the system, Mr. Reardon, that's the game, and once you understand it, you'll be much easier to deal with." 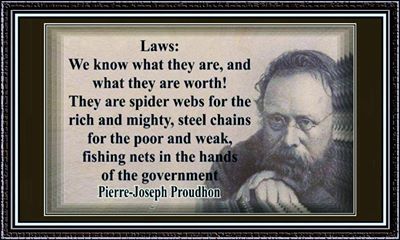 Posted by The Whited Sepulchre at 9:51 AM

The federal government continues its hard work of adding more and more criminal laws. The current number is approximately 5,000. No one knows the exact number, not even Dept. of Justice lawyers. (The number of federal regulations is more than 100,000.)

Contrast that with the criminal laws needed by a libertarian government.

It is a crime to:

1. Kill, injure, forcibly restrain, or abduct another person except in self-defense or defense of others.

2. Steal property or destroy property that you do not own.

Yep. That would do it, if you added those enumerated by the Constitution - counterfeiting, piracy (crimes in international waters) and treason. I think that's it, right?