Why Economic Nationalism is a philosophy of war

Here's some Ludwig Von Mises, explaining why Economic Nationalism is a philosophy of war.

I've long believed that Economic Nationalism (quotas, tariffs, price supports), like most other forms of tribalism, was outright racist but I couldn't quite articulate it.


Imagine a world in which the principle of private ownership of the means of production is fully realized, in which there are no institutions hindering the mobility of capital, labor, and commodities, in which the laws, the courts, and the administrative officers do not discriminate against any individual or group of individuals, whether native or alien. Imagine a state of affairs in which governments are devoted exclusively to the task of protecting the individual's life, health, and property against violent and fraudulent aggression. In such a world the frontiers are drawn on the maps, but they do not hinder anybody from the pursuit of what he thinks will make him more prosperous. No individual is interested in the expansion of the size of his nation's territory, as he cannot derive any gain from such an aggrandizement. Conquest does not pay and war becomes obsolete. 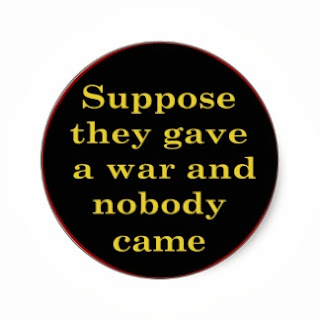 Posted by The Whited Sepulchre at 6:49 AM

Birds of a feather cling together. And their leaders want more birds. Hence gangs / team sides / nations become ever interested in increasing their size.
War is a natural state of man but is fulfilled by whatever means exists that makes easy profit possible.
Currently a religion battles wherever it can. And seems to be doing quite well.

The older I get, the more I believe that the root cause of any huge conflict is Tribalism.