The most destructive company in America is about to go bankrupt !!

Busybodies in the USA have spent the last 20 years weeping, wailing, and rending their garments because of the destructive impact of Wal-Mart.  Wal-Mart supposedly kills downtown areas, they don't pay people "enough", and they purchase their merchandise from people of the wrong racial makeup.
Progressive city councils pass legislation almost every day, trying to force Wal-Mart (and no other company) to pay higher wages, build smaller stores, and basically, stay away.
They almost always fail. 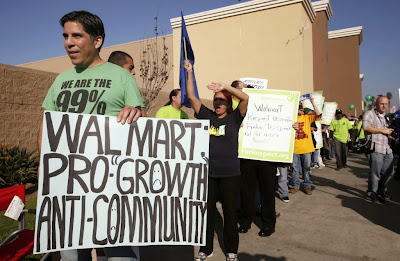 (Full Disclosure: I work for a company that makes display fixtures for grocery stores.  All grocery stores, not just Wal-Mart.  I've shipped more fruitstands to more grocery stores than anyone who has ever lived.  Hell, somebody had to do it.)

But if you think Wal-Mart is destructive, you shoulda seen Safeway.  Back in the day,   Safeway built massive (6,000 square feet in some cases) stores, stores that carried EVERYTHING you could ever want to eat.  Some of their stores even had their own parking lots!!  They didn't offer sales on credit to their customers!!  Safeway was a threat to the American way of life !!  The Mom 'n' Pop stores didn't stand a chance!!

And before Safeway was A&P, a company that few people under 40 have ever heard of.  A&P's destructive tendencies gave it the reputation of "the most controversial company in the nation".

Marc Levinson of the Wall Street Journal has written a great piece on the A&P controversy, and I'm scraping and posting it here before it disappears behind a paywall.  I've long known about the evolution of the grocery industry, and how government has fought progress every step of the way, but I've never seen this much online about what A&P went through.

Every day that you don't have to make your own soap, mix your own toothpaste, or stop at four different places for meat, tomatoes, diapers and razors, you owe that unimaginable luxury to the visionary pioneers at The Great A&P Tea Company, Safeway, and Wal-Mart.

A prosecutor in Franklin Roosevelt's administration called it a "giant blood sucker." A federal judge in Woodrow Wilson's day deemed it a "monopolist," and another, during Harry Truman's presidency, convicted it of violating antitrust law. The federal government investigated it almost continuously for a quarter-century, and more than half the states tried to tax it out of business. For its strategy of selling groceries cheaply, the Great Atlantic & Pacific Tea Company paid a very heavy price.

Now, more than a century and a half after its birth near the docks of lower Manhattan, the Great A&P is reaching the end. The company, with holdings that include East Coast grocery chains such as Food Emporium and Pathmark, filed for bankruptcy in December 2010 and emerged from Chapter 11 status as a private company. Over the summer, news emerged that A&P had hired Credit Suisse to review its options, with a sale—to either to another grocery company like Kroger Co., or an investment firm like Cerberus Capital Management—a strong likelihood.

So far, no deep-pocketed shopper has plucked A&P off the shelf. The watching and waiting continues. When the company with the familiar name finally fades from the American scene, few will recall what A&P once was: the most controversial company in the country, the center of a struggle over the very nature of American capitalism. 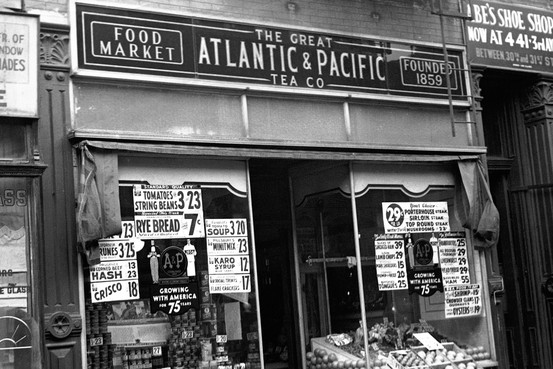 
Price-cutting A&P stores like this one in 1934 angered competitors—and Washington.
A&P was Wal-Mart long before there was Wal-Mart. Founded around the start of the Civil War, it upset the tradition-encrusted tea trade by selling teas at discount prices by mail and developing the first brand-name tea. A few years later, its tea shops began to stock spices, baking powder and canned goods, making A&P one of the first chain grocers.

Then, in 1912, John A. Hartford, one of the two brothers who had taken over the company from their father, had one of those inspirations that change the course of business. He proposed that the company test a bare-bones format at a tiny store in Jersey City, offering short hours, limited selection and no home delivery, and that it use the cost savings to lower prices. The A&P Economy Store was an instant success. The Great A&P was soon opening one and then two and then three stores per day. By 1920, it had become the largest retailer in the world.

John Hartford and his brother, George, the firm's financial wizard, didn't stop there. In the 1920s, they integrated vertically. They opened a produce brokerage to supply their stores with fruits and vegetables, which many grocery chains didn't carry at the time. They acquired bakeries, canneries and bottling plants—and leveraged their ability to make everything from ketchup to chocolate bars to strike tougher bargains with suppliers. They refused to buy through wholesalers and demanded that suppliers pay A&P the standard wholesale commission. And they plowed A&P's cost savings back into lower prices, fueling relentless growth. In 1929, A&P became the first retailer ever to sell $1 billion of merchandise in a single year.

While shoppers flocked to A&P's 16,000 stores, small grocers and grocery wholesalers didn't share their enthusiasm. The anti-chain-store movement dates back at least to 1913, when the American Fair-Trade League pushed for laws against retail price-cutting. It grew through the 1920s, as groups such as the aptly named Association Opposed to Branch Stores in Missouri demanded action against the chains.

The U.S. Supreme Court lent its support to the movement in 1931, approving taxes based on the number of stores a retailer owned. No company suffered more than A&P, which operated several times more stores than any other retailer.

Franklin Roosevelt's New Deal piled on. The National Industrial Recovery Act of 1933, the centerpiece of Roosevelt's economic recovery program, tried to bolster profits by subjecting entire industries to "codes of conduct" created by industry committees. The code for food retailing imposed minimum price markups on almost every product, blocking more efficient retailers from offering lower prices than less efficient competitors. The business sector, led by the U.S. Chamber of Commerce, cheered such measures, as did many Republican politicians. When the head of a major trade organization complained that business was "being crucified on the cross of competition," no one thought it strange.

After the Supreme Court struck down Roosevelt's codes in 1935, Wright Patman, a populist congressman from Texas, took up the cause of the country's 600,000 or so mom-and-pop grocers. Restricting chains, Patman declared, would keep "Hitler's methods of government and business in Europe." The Robinson-Patman Act, passed in 1936, kept suppliers from selling more cheaply to large customers than to small ones, stripping A&P of its cost advantage. The law forced up grocery prices and devastated A&P's profits. Six years later, the Justice Department brought one of the most bizarre antitrust cases of all time, accusing A&P and its executives of illegally restraining trade by demanding lower prices from suppliers—and winning.

Thanks in good part to the Hartfords' tenacity, the restraints on discount retailing began to fade away in the 1950s. Chain-store taxes were gradually repealed, and state laws limiting price competition to protect mom and pop were taken off the books. By 1962, when Wal-Mart, Target, Kmart, and other modern discount formats were born, the pendulum had swung in consumers' favor.

By then, John and George Hartford were dead, and their company, after passing into the hands of less competent managers and going public, had entered a death spiral that appears to be in its final stages. A&P, once the country's best-known brand, is by now so tarnished it probably has negative value, and any buyer will likely retire it. But even if the Great Atlantic & Pacific doesn't live on in name, it will leave an important legacy: the idea that capitalism can benefit consumers, if only capitalists will allow it to do so.

The luxuries that A&P brought us are now so commonplace that our miraculous abundance now seems almost normal.

And somewhere this morning, working in the back room of a Wal-Mart, a stockboy (or girl) has come up with the idea that will destroy Wal-Mart.  Wal-Mart won't stand a chance

Progressives and other busybodies will try to stop him, and call him "a giant blood sucker", a vulture, or just a greedy bastard.

He will be accused of cutthroat competition, monopolistic behavior, and being un-American, all for trying to improve on Wal-Mart's methods.

I wish I could figure out who he is, and start buying stock early.

Posted by The Whited Sepulchre at 6:42 AM