Mother should I trust the government?

During the past few years, the Tarrant County Libertarian Party has:

1) Participated in an anti-Federal Reserve protest at the Dallas Fed.

4) Participated in Gay/Lesbian pride parades in Dallas and Fort Worth. (And won twice!)

7) We would’ve participated in Peace Marches, but the Peace Movement doesn’t really exist during Democrat administrations, and we don’t have the numbers to shut down the streets by ourselves.

8) Supported anti-Eminent Domain candidates for our regional Water Board.  And won!!

Stuff like that makes for a diverse group off allies.  But those groups have something in common....

Most members of these sub-groups will tell you that they oppose Democrats. Or Republicans. This is like declaring your loyalty to The Crips because if you stop supporting The Crips, then The Bloods will take over.  Republicans and Democrats might go at each other like cats and dogs, but at the end of the day, neither group is going to endanger the oppressive system that makes their leadership (and their leaches) very, very wealthy and very, very powerful.

Our challenge, as Libertarians, is to convince those who fear the government to merely oppose the government in all its unholy acts, instead of trying to kill off Dr. Jekyll while saving Mr. Hyde.  On almost every issue, John Boehner and Nancy Pelosi are different in degree, not in kind.  And I'm struggling to think of any issues (maybe guns?) where Bush/Obama differ by a significant degree.    (No, I take that back.  They don't even differ on guns.  Barack approves of giving guns to Syrian rebels, and to Mexican Drug Lords via Operation Fast And Furious.) 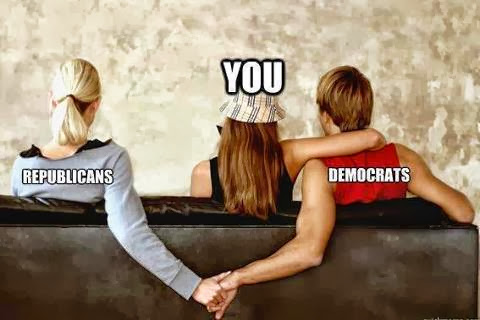 When government gets big enough, it prints money, oppresses non-conformists, confiscates citizen weaponry, determines who can and can’t marry, racks up a lot of debt, nationalizes industries, starts wars, and confiscates property. That's all part of the package.

Let’s stop talking about Red vs. Blue. Let’s reframe the debate as Free vs. Slave.

" Let’s reframe the debate as Free vs. Slave."

A more accurate comparison is Free vs. Little Siblings (of Big Brother). Little Sibs aren't slaves. They're ignorant (unwittingly or willfully), infantile, malleable, uncreative, and mentally lazy. It's hard to convince Little Sibs that liberty and freedom are important, because they prefer a paternalistic government that lets them be irresponsible.