I went to the Dallas "End The Fed" rally in Downtown Dallas this afternoon.
The biggest surprise was my friend John Jay Myers, who is running for Dallas City Council. (Here he is sounding off at an earlier meeting, objecting to Dallas building a half -billion dollar hotel.)


I already knew John to be a very smart man, but had no idea he could work a crowd like he did this afternoon. As soon as the YouTube of this event goes up, I'll post it here. Plus, I'll put up other pictures as quickly as people send them to me. 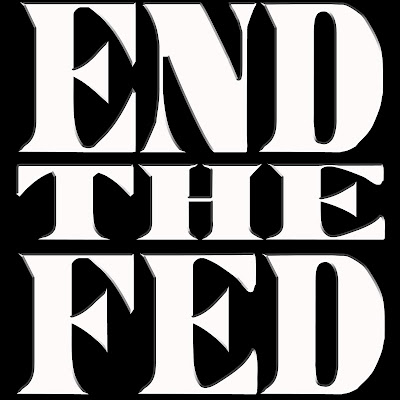 Here's a hypothetical question that I spent a lot of time pondering while listening to other speakers and waving my Tarrant County Libertarian sign in front of The Temple Of Baal.

Assume someone is a counterfeiter, and a very good one. No one can tell the difference between this counterfeiter's product and the paper money rolling off the presses at the Fort Worth Bureau Of Engraving And Printing. Let's assume that there is no difference other than point of origin.

Why is it illegal for the counterfeiter to print and spend his homemade money? Who is harmed by it? As long as it can't be distinguished from the genuine article and is still accepted by merchants, doesn't it serve the same purpose?

Couldn't you even say that it stimulates the economy?

Posted by The Whited Sepulchre at 6:43 PM

The difference between a completely identical pair of bills, one from a 'counterfeiter' and one from the Mint is the one from the mint can be taken to the bank and upon demand, exchange it for the amount of silver stated on the face of the certificate. Oh wait.

I took a course in college called Money, Banking and the Economy, taught by who would become one of my favorite profs, Dr. Charles Becker. He did a good job of laying out the facts and letting us come to our own conclusions.

About halfway through the course I was scratching my head. Although I had taken other courses that showed me how increasing "i", "S" increases (or something like that)... when the Fed increases or decreases the Fed Funds rate, money supply decreases or increases. In THIS course it dawned on me that this was a consortium of private banks that had no oversight from the Federal Government and in this age (1986) of electronic assets, were increasing M1 by increasing private debt. WTF???

My final exam was a blue book with a single essay question: "Describe the Federal Reserve". I should've written "legalized plunder through smoke and mirrors" and turned in my book. I wrote WAY more than required... I made a 'B'. I bet my sentence fragment would've gotten me an "A+". Dr. Becker was that kind of guy.