Action movie star Jackie Chan, now that he's a millionaire, apparently believes that Chinese people need to be controlled with a heavy hand.
This is from The Telegraph:

The actor told a forum on the southern Chinese island of Hainan, whose attendees included Wen Jiabao, the Chinese prime minister, he was not sure "freedom" was necessary.
Chan, 55, whose latest movie, Shinjuku incident, was banned in China, was asked about censorship and restriction on the mainland. He expanded his comments to discuss Chinese society in general.

"I'm not sure if it is good to have freedom or not," he said. "I'm really confused now. If you are too free, you are like the way Hong Kong is now. It's very chaotic. Taiwan is also chaotic."
He added: "I'm gradually beginning to feel that we Chinese need to be controlled. If we are not being controlled, we'll just do what we want."
His comments were applauded by the Chinese audience, but triggered fury in Hong Kong and Taiwan. 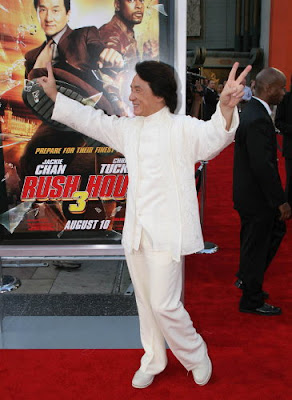 Jackie Chan movies are a favorite in the Sepulchral Household. The Aggie and I have always enjoyed the outtakes of his failed stunt attempts.

Mr. Chan had the good fortune to be born in British Hong Kong instead of tightly controlled mainland China. Because of his acrobatic ability, he missed out on master controller Mao's Great Leap Forward - an experiment in social engineering that cost between 20-40 million Chinese lives. Chan was acting as an extra in Bruce Lee movies by the time Mao socialized/controlled every other aspect of Chinese Society in The Cultural Revolution, the worst thing that has ever happened to any society anywhere. And yes, I've read more about the Holocaust than most people.

No one planned Jackie Chan's success except Jackie Chan. No one felt obligated to "control" his career, and he should be thankful. Chan busted his butt (literally) to get where he is today. A commenter on Samizdata gave his newfound attitude a name that I love: "Pull up the ladder, I'm doing all right".
Posted by The Whited Sepulchre at 9:10 AM

So the Chinese people must be controlled. By whom? By other Chinese people. Why? In order to avoid the same kind of prosperity that plagues Hong Kong and Taiwan.

I think Jackie has taken one too many kicks to the head.

There goes another of my heroes.

I hope he was just being politic. "I mean that whole too much freedom and people just do what they like..."

Well, yes. That I always thought was sort of the point.

Back as ever to the one true hero: Clint Eastwood.