I saw the new movie "State Of Play" Sunday night.

Ben Affleck essentially plays Congressman Gary Condit, (corrected on 4/21/09) Maria Thayer is Chandra Levy, an evil military contractor called Point Corp stands in for Blackwater, Russell Crowe is the entrepid reporter, and Helen Mirren is his editor, whose job it is to sound so British that Russell Crowe sounds like an American. 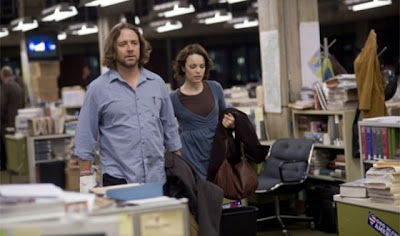 The movie is great until the last 15 minutes. Then the screenwriters become afflicted with what Roger Ebert has called Keyser Soze Syndrome, in which everything logical about the film is sacrificed for a plot twist at the end. The clue that tips off the Russell Crowe character doesn't make a lick of sense. This info doesn't even deserve a spoiler alert. It makes no sense. But then, a lot of people like the stimulus package, and I didn't understand that either.

But enough about the plot.
One of the subtexts of the movie is the competition between newspapers and the internet. Russell Crowe's character is paid to run around gathering information. Until he prints his stories, bloggers have nothing to write about, nothing to disagree with, and little or no basis for blaming the lamestream media.
This guy is vital.

Have we ever needed dedicated, objective reporters more than now?

When's the last time you can remember a TV journalist breaking a major story?

I spent a lot of time during this movie thinking about our beloved Fort Worth Star-Telegram, which has fallen on hard times since being bought out by the McClatchy organization.

I have friends who believe the Star-Telegram has gotten too cozy with City Hall, and has gone too easy on Chesapeake. In all honesty, we need to thank the Startlegram for what little we do know about City Hall and Chesapeake, don't we?

Craigslist and Ebay have taken away the classifieds, Fandango has taken away the need for movie ads, bloggers have decimated the editorial page, and that's what has happened after the televised teleprompter readers did their damage.

We're going to miss the Fort Worth Star-Telegram if it goes under.

Please subscribe.
Posted by The Whited Sepulchre at 10:00 PM

Stephen -- you beat me to the punch with your correction.

WS - does it count if I subscribe to the Dallas Morning Snooze?

Stephen,
Thanks for the correction.

Dr.,
According to Amon Carter, who took brown bag lunches to Dallas business meetings so he wouldn't have to spend money in that city, no.
According to Free Market Fundamentalism, yes.
According to Molly Ivins, no.

Honorable friend - I'm sensing some inconsistency here between your normally enthusiastic support of free-market principles and some arguably parochial interests. Not that I mind, of course: a foolish consistency is the hob-goblin of small minds, and all that.

I just want to make sure I'm not missing something here. Help me understand.

Doctor,
Hence the pros and the cons listed in the previous post.
Consider it Marketing.

Better hope TLG doesn't catch wind of this lapse. He'll be calling you the Pinked Sepulchre before you know it.

Doctor,
You'll note that I haven't said anything to support the nationalization of newspapers, turning each of them into a little hard copy NPR.
I've made no mention of a Star-Telegram bailout.
Cartoonists, sportswriters, and other ink-stained wretches won't show up at your door in the middle of the night to drag you away to Huntsville if you refuse to support the FWST.

I'm merely acting as an advocate. Much like I'm trying to get people to support my Starbucks at Camp Bowie and Hulen (which is having its lease renewed on a quarter to quarter basis, depending on profitability).

There are good things out there that deserve support. If we CHOOSE to support them.

There must be something I'm missing when I've flipped through the S-T. All I've found is AP wire pieces, sometimes with light edits, reprinted press releases, and the usual comics and liberal editorials. Not something I've found worth paying for. In fact, when a paperboy offered to toss it on the lawn for free four days a week I told him I'd have him charged with littering.

The NW Tarrant Times-Record, OTOH, does present info I can't find in a hundred other places. Time to renew the subscription.

sniff sniff... Ah, thought I smelled something burning. I'm not sure I get where Whited's asking for bailing out.. Maybe glossed over it. Lunesta is kicking in so cucumber never pencil zebra.

Anyhow, I liked the movie too and thought the ending a little contrived, but I love Jason Bateman as a hateable guy (like in Juno)... My friend Lynn Lunsford worked for the FWST back in the day and going to his office occastionally was not too far off the scene in the move. WAY less clean and tidy tha "All the President's Men". He still works for the Wall Street Journal and types at his house, or in France, or wherever and emails his stories in.

Paper is cool in a way, but I haven't read a paper paper in days. However, I've been to star-telegram.com, dallasnews.com and pegasusnews.com multiple times today. I guess Town Criers got the same sad ushering into the new media.

Lunesta talking... funny skit idea on saturday night live. Medieval Town Criers who would individually give info to people on their couch. They could TV past the commercials, slow mo, fast mo, rerun. He could re-enact sports. And then they could pause, leave (and they'd be there frozen in the same position) and click - and back right where they were... Funny idea. I'm wirting it... nobody steal it! Uh no... This is something Michael Scott would do.