I am a Mercedes-Benz

Let me begin by saying that I am a Mercedes-Benz.  Not a Ferrari, not a Rolls, not a Corvette, but a little better than a Cadillac.

I'm 53 years old, work in a family business, and I've always been pretty damn good at what I do.  I've been "Employee Of The Year" or "Manager Of The Year" for three different companies, one of which you've probably heard of.

If Washington decides to raise the minimum wage to $20.00 an hour I won't be one of the ones going unemployed because the political idiots set the bar too high for me to find employment.  Except for one brief stretch of starting over in a new field, I've made more than $20 per hour for the last 30 years or so.  (Thirty years ago, $20 was more like today's $40.)

Now that the throat-clearing is out of the way, here's what you'll find this morning in the New York Holy Times:


The White House has thrown its weight behind a proposal to raise the federal minimum wage to at least $10 an hour.

“The president has long supported raising the minimum wage so hard-working Americans can have a decent wage for a day’s work to support their families and make ends meet,” a White House official said. President Obama, the official continued, supports the Harkin-Miller bill, also known as the Fair Minimum Wage Act, which would raise the federal minimum wage to $10.10 an hour, from its current $7.25.

The legislation is sponsored in the Senate by Tom Harkin of Iowa and in the House by George Miller of California, both Democrats. It would raise the minimum wage — in three steps of 95 cents each, taking place over two years — to $10.10, and then index it to inflation. The legislation will probably be coupled with some tax sweeteners for small businesses, traditionally the loudest opponents of increases to the minimum wage. 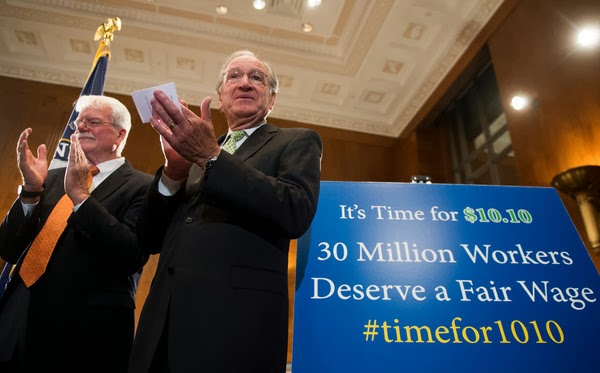 The overwhelming majority of economists know that there is a trade-off with this type of legislation.

Why does this happen?  As a very general rule, minority teens have no skills.  No track record.  No one knows if they can get to work on time, work hard through an entire shift, or get along with others.

The same thing can be said about white teens.  But white parents can (generally) get to work on time, work hard through an entire shift, and (sometimes) get along with others.  And the apples usually don't fall too far from the tree.

So if you're thinking about hiring a kid, who are you going to go with?  The little white snowflake from the 'burbs, or the black kid from the 'hood?

Here's what you're going to do.  I've sat back and watched you do it.  This is the minority teen unemployment rate, cross-referenced to the rising minimum wage.  One of the most beautiful correlations you'll ever see: 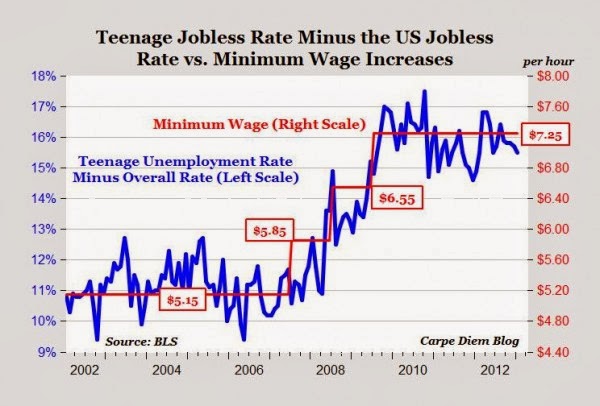 I'm almost 100% safe from unemployment.  So is my daughter.  We got us some skills.  We can type, manage, hire, fire, ship, transport, purchase, cashier, file, pile and get 'er done.

If the government declares that the least you can pay for a car is $50,000.00, which one are you going to buy?

You're going to go with the Mercedes every time.

Posted by The Whited Sepulchre at 7:44 AM

The airport town of Seatac, Washington may have just raised their minimum wage to $15 (the vote remains too close to call). So it'll be interesting to see what happens there.

Of course, I'd like to know the profile of all the workers earning below that level. How many are there? Who are they? What are they doing?

If you're talking about a large number of folks currently working for $9, then the effects might be dramatic. If it's only a percent or two of the entire workforce, then the effect may be virtually invisible.

On the other hand, at the airport itself, I notice that a huge proportion of jobs are held by recent immigrants, many from Africa and Latin America, which seems to be a thing in many US airports these days. That's likely driven by cost and reliability, but perhaps, since they've got to pay $15 an hour now, airport employers might actually consider hiring some Americans.