WE ONLY HAVE 24 MONTHS TO SAVE THE PLANET!!

Trust me, just hit that link.  I'll be here when you get back.

Here's the link again.  I know how you folks are about hitting links.

If we've passed that horrific date (December of 2016) without taking significant action on Climate Change, we will have passed yet another Tipping Point.

It will be too late to begin stumbling around in the dark all night like a pack of aboriginal tribesmen just recently down from the trees.

By December something of 2016, it will be too late to tax the carbon emitters who have made your world an unimaginable paradise (if your grandparents could see you now).

It will be too late to make governments more powerful.

Have you had your giggle?  (I love the sound that Tipping Point deadlines make when we go flying past them.)

This is like the U.N.'s threat that we'll have fifty million climate refugees by 2010.

It's like Al Gore's fake concern that the polar ice caps will be gone by 2013.

It will be like all of the other failed climate predictions, and there are a lot of them.

The climate prediction business (and it's nothing but a business) is much like all the predictions for the return of Christ.  You can be wrong all you want, then just re-arrange the scriptures, come up with a new date, and still not lose very many followers.  And if you drop out altogether, the business will continue without you.

Sometime after December 2016, the proprietors of the 100 Months And Counting website will look around at the ice caps, the snow, and the rest of the typical wintertime weather, and they'll shut down their Tipping Point Apocalypse website.

Then they'll move on to the next gimmick and the next marketing/scaremongering stunt, never doubting the righteousness of their cause.  There's a sucker born every minute. 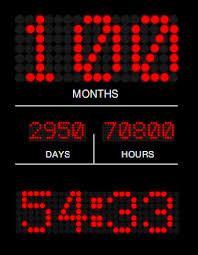 Posted by The Whited Sepulchre at 5:48 PM

Most of the people here are too young to remember the "Impending Ice Age" from the 1970's. Yes, they've been doing this same thing over and over. This time it has legs - that is the only difference. And as to "climate change" - yes, it's been changing for 4.3 billion years and will continue to long after humans go the way of the dinosaur. Is it anything "WE" can do about it? No - other than waste money and enrich the Al Gore's...