A Strange New Respect For Fruits.... 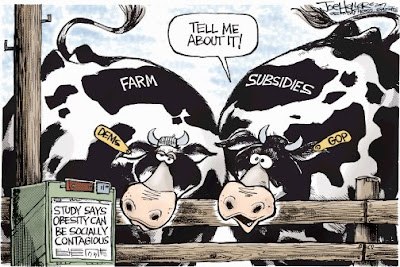 This was part of my bedtime reading last night, from U.S. News & World Report. You can click here to get more opinions on the current shameful Farm Bill going through Congress.

At Last, Some Respect for Fruits and Veggies
Specialty growers are likely to get more goodies from the farm bill
By Kent Garber
Posted March 13, 2008
Since early 2007, Congress has been working to renew a sweeping farm bill that provides billions of dollars of funding for agricultural programs. If these subsidy programs didn't exist, combined with high tariffs on imports, you would be cruelly forced to spend less on groceries. It's a ritual that gets repeated about every five years, and its main beneficiaries are usually the same: farmers who grow corn, wheat, and other commodity crops, (Sugar has been protected since Thomas Jefferson) and who are paid for doing so, and low-income people on food stamps.

Note the low-income people on food stamps. They're shoveled in there to give this enterprise a virtuous glow. They also make the farm subsidies more difficult to vote against. "CONGRESSMAN JONES VOTED TO STOP GIVING FREE GOVERNMENT CHEESE TO LOW-INCOME PEOPLE ON FOOD STAMPS ! ! ! the headline would read.

Imagine voting against something called the "Let's Raise Military Spending By 50% And Give All 10-Year-Olds-With-AIDS a Free Pony" Act of 2008. It can't be done.

That's what we're up against.

But that club is about to get a new member. Although the content of the final bill, now making its final way through Congress, remains uncertain, individuals familiar with the negotiations say this time fruit and vegetable industries are likely to receive up to several billion dollars of indirect aid, (meaning, they're going to put quotas on foreign food, or require the states to buy a lot of domestic celery) including a big boost for school snack programs. If they do, it would be one of the most significant shifts in food policy in years.

Here's what makes this type of scam difficult to stop. Here's something from the Future of Freedom Foundation:

(This problem is because of) the concepts of "dispersed costs" and "concentrated benefits." The price of any single government program, such as the sugar program, is small for any individual consumer. If he could compute the additional amount he has to pay because of the program, it would probably seem too small to justify active opposition. Most people are busy making a living and raising their families. The opportunity costs of organizing against the sugar program would outweigh the benefits even if there was a good chance the program could be abolished. A fully informed citizen would probably shrug his shoulders with regret and a sense of futility. That is the effect of dispersed costs.

Therefore, we've paid too much for sugar for the last 200 years.

Some analysts have applauded rising grain prices by calling this the "Golden Age of Farming." Yes. 10% of the farmers get 65% of the subsidies. Huge agribusiness corporations. Also included are sturdy yeomen like David Rockefeller, Ted Turner, and the NBA's Scottie Pippen. Numerous members of the House and Senate received subsidies 46 times greater than that of the median farmer. Click here for details. And you can click here for an older rant of mine about your moral duty to support the farmers of Manhattan.

But while crops like corn, wheat, and soybeans are selling at record levels, they account for only a portion of the value of all U.S. crops. A slightly bigger chunk comes from fruits, vegetables, and nuts, which traditionally receive almost no federal subsidies and significantly less support for marketing. Cover your wallets, bury the family silver in the back yard, lock up your daughters. This ain't going to be cheap....

Two growing problems underscore the need to narrow the disparity in funding, observers say. Lord have mercy, what a warped perspective. The best way to "narrow the disparity in funding" is to eliminate all of it for everyone. The first is the growing danger to crops. In California, a new pest, the light brown apple moth, recently fluttered into the state from Australia. Officials have estimated that an infestation would cause hundreds of millions of dollars in damage, decimating everything from avocados to oranges. Forebodingly, the moth was spotted in wine-rich Sonoma County last month; authorities plan to spend $75 million this summer dumping pesticides to eradicate it. Officials estimate....Authorities plan....Faceless people declare....Sources say....You gonna pay.

California has company in its misery. "With trade barriers lifted and global trade increasing," says Florida Department of Agriculture spokesman Terence McElroy, "our office is getting reports of at least one new pest or disease of significant economic concern per month." Warmer temperatures also create more fertile conditions for breeding. Remind me to send "cucumber subsidies" to the guys who keep the tongue-in-cheek list of Things Caused By Global Warming.

The second concern is public health. Although prices for bread and baked goods have inched up, the increases have been relatively recent. Not so with fruits and vegetables: On average, their price rose 40 percent from 1985 to 2000. A University of Washington study, released in December, found that the price of low-calorie foods, such as fruits and vegetables, jumped nearly 20 percent from 2004 to 2006, whereas high-calorie items, including candy, actually dropped in price, making them even more palatable to consumers. You see, all of this is for your own good.

Vulnerabilities. Historically, states have paid for specialty crop costs, such as for marketing products and developing new technology, with only modest help from Washington. The amount of support has paled in comparison with the yearly handouts to grain growers, arguably leaving vulnerabilities. "We're now seeing double, triple the incursion rate of pests," says California Rep. Dennis Cardoza. "To tackle these problems, it's got to be the federal government doing the research." Otherwise, the scam would be unfair? Is that really the point he's trying to make?

The strategy seems to be paying off. "It opened a lot of doors that were not necessarily open during the last farm bill debate," says Robert Guenther, a senior vice president of the United Fresh Produce Association, a member of the lobby. "It allowed us to go into more urban and suburban offices and address issues related to schools." They learned this from Bill Clinton. It's all....For The ChildrenTM
One hopeful sign: The Senate's bill, passed in December, would allocate $2.2 billion for specialty crop programs, including $225 million annually to expand a program that provides fruits and vegetables to public schools. By contrast, only $6 million was allotted for the effort when the Farm Bill was renewed in 2002. One hopeful sign? That's a hopeful sign? Hopeful? Kent Garber wrote that sentence. We aren't from the same planet.
Compared with the more than $15 billion handed out in federal crop subsidies each year, a couple of billion over five years might not seem like much. But considering that specialty crops started with zero, says Guenther, it's a good start. I dunno. A billion here, a billion there, and before long you're talking real money.

Cartoon and other worthwhile commentary are from Caglepost.
Posted by The Whited Sepulchre at 7:30 PM