The End Of Chicken Stacking In California

My Aggie daughter came home from College Station this past weekend, and she was outraged.

Unlike most large packs of academics, the A&M tribe seems to be somewhere off to the right of Barry Goldwater.
(A friend of mine sent me a press release today about A&M's Young Conservatives losing their faculty advisor....He was rumored to have an Obama sign in his yard. In the same link, check out the Young Conservatives' response to the "demonization" of the despicable William Ayers. The demonization of William Ayers, in my opinion, is like the demonization of Timothy McVeigh....just because the bastard failed to kill a couple of hundred people doesn't get him off the hook.)
Anyway, back to my point.... My Aggie's Animal Science professor had gotten the students worked up over California voters passing Proposition 2, a ballot initiative that regulates the minimum amount of space in which farm animals can be confined.

(Proposition 2 shouldn't be confused with Proposition 8. Proposition 8 is the California ballot initiative that regulates the type of marriage arrangements within which two people can be confined.)

Some obvious abuses have already been identified and partially eliminated in the cattle, swine, and of course the infamous veal calf industry. But my little Aggie was still angry, saying that the government had gone too far this time. She was under the impression that stackable A-frame chicken cages would be slowly outlawed in the course of a 5-year phase out.

Well, dang it, any professor who works Anti-Big Government rants into his VooDoo Arts Of Animal Healing lectures should have my full support. (She was bothered enough about it to demand that I go online and write something about governmental over-reach in California's stackable chicken industry.) 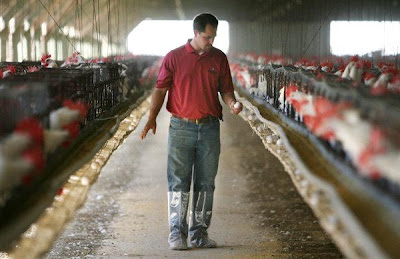 This is a PDF of the request for a ballot proposal.

And here's the always helpful Wikipedia, which claims that actress Alicia Silverstone supported the proposition. The L.A. Times and the San Francisco Chronicle opposed it. Alicia Silverstone, star of "Scooby Doo 2: Monsters Unleashed", prevailed in the voting.

Here's what the thing amounted to: Cattle were lumped into the same category as poulty, mostly for emotional reasons. (Voters don't give a rip about chickens.) But California doesn't have a significant Cattle industry. California, until election day, had a huge poultry/egg industry.

The passage of Proposition 2 basically ends the industry in that state. California's Chicken Stackers are going to relocate elsewhere in the next 5 years.

(I've tried for two minutes to think of a closing sentence with the phrase "flew the coop", but I've failed. Be grateful.)

Posted by The Whited Sepulchre at 2:36 AM

Nobody here but us chickens....