Here's an interview in the Belfast Telegraph with the photographer who took the pic of one of the Mumbai gunmen in the now-famous picture below.....

Sebastian D'Souza, a picture editor at the Mumbai Mirror, whose offices are just opposite the city's Chhatrapati Shivaji station, heard the gunfire erupt and ran towards the terminus. "I ran into the first carriage of one of the trains on the platform to try and get a shot but couldn't get a good angle, so I moved to the second carriage and waited for the gunmen to walk by," he said. "They were shooting from waist height and fired at anything that moved. I briefly had time to take a couple of frames using a telephoto lens. I think they saw me taking photographs but they didn't seem to care." 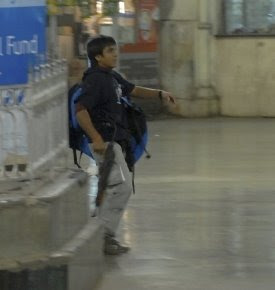 The gunmen were terrifyingly professional, making sure at least one of them was able to fire their rifle while the other reloaded. By the time he managed to capture the killer on camera, Mr D'Souza had already seen two gunmen calmly stroll across the station concourse shooting both civilians and policemen, many of whom, he said, were armed but did not fire back.

...."There were armed policemen hiding all around the station but none of them did anything," he said. "At one point, I ran up to them and told them to use their weapons. I said, 'Shoot them, they're sitting ducks!' but they just didn't shoot back."

....Mr D'Souza added: "I told some policemen the gunmen had moved towards the rear of the station but they refused to follow them. What is the point if having policemen with guns if they refuse to use them? I only wish I had a gun rather than a camera."

No other commentary on my part seems necessary, does it?

For a brief history of gun control in India, click here.

The same blogger has posted something called "The Parable Of The Sheep".

Posted by The Whited Sepulchre at 1:53 PM