Ok, now that the election is over, I swear I'm seeing more Obama bumperstickers than I saw before election day.

Am I alone in noticing this?

Anyway, everyone that I know went to the polls and voted.
The question is, did you have any business voting? William in the Tarrant County Libertarian Meetup sent out a link to a Basic Civics Test to the TCLM members, and everyone who did well is spamming the hell out of everyone else's inbox with their high test scores.


I agree with my friend and former co-worker Tim Lebsack that there's some Big Government bias on question 30. (And who really gives a crap about Sputnik? We don't need no stinkin' Commie Sputnik ! Neil Armstrong was the one who brought dirt back.)


Take the test by hitting the link above, and get back to me.


According to the people who administer the test, the average college freshman scores a 52. After four years of college, the average senior scores a 54.


71 percent of Americans fail the test, with an overall average score of 49%.
Liberals score 49%;
Conservatives score 48%.
Republicans score 52%
Democrats score 45%.
(So far, the average Tarrant County Libertarian score is an 89%, but I'm only hearing from those who are proud of their achievement.)

Fewer than half of all Americans can name all three branches of government, a minimal requirement for understanding America’s constitutional system.

Only 24% of college graduates know the First Amendment prohibits establishing an official religion for the United States.


At the risk of sounding like an interventionist.... if you scored below 70%, may I suggest a remedy? 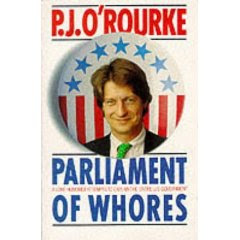 "Parliament Of Whores", by P.J. O'Rourke. O'Rourke worked his way through the ranks at Rolling Stone, Car & Driver, American Spectator, and several other periodicals. This book is his attempt to explain how the government works. And it's hilarious. I can't recommend it highly enough.
And I'm still waiting on someone with the Tarrant County Libertarians to admit that he/she made less than a 70.
Posted by The Whited Sepulchre at 9:26 PM

Hey - hate to toot my own horn but ... ahem * 93! Toot! Toot! Almost 50 points higher than the average elected official.

Perhaps we should set up a tutoring service for the average democrat...

Question 30 is INSANE! Had the real answer been used I would've scored 97. Toot!

If this shows up twice - my bad.

Maybe the Tarrant Libertarian Party should do some tutoring to the Dems and GOPers. Once they learn the US Constitution and a little history... they may come over to the LP in droves!

I shamefully scraped 88.2% of my Barr '08 bummer sticker off my bumper 12 hours after election night. I left on my "Texas Libertarian" bumper sticker.

The only reason I have 11.8% left is that it's not very high quality and tore into bits. The remainder has somehow melded itself into my paint. Nice going BARR!

I did so poorly I'm not posting my score to be easily retrieved. You have to search for it. Sorry.

I missed one, and I still think the official answer is debatable. And no, you're not alone - I've also noticed a lot more Obama stickers post-election than pre-election.

And I am Australian, not American, and I have never had a civics lesson in my life.

Congratulations on doing well on our Civics test. But before you get too big-headed, please remember that you don't have the disadvantages of an American education....

Good to hear from you !

I missed two, and I kick myself for one of them.