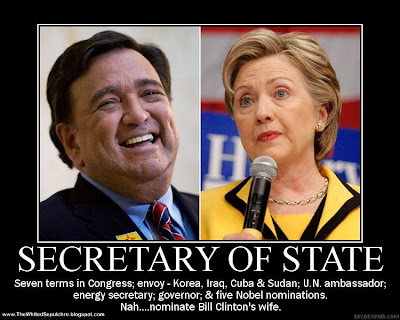 The Richardson Snub
by Ruben Navarrette


Check out this gold-plated resume: Seven-term member of Congress; special envoy to North Korea, Iraq, Cuba and Sudan; U.N. ambassador; energy secretary; governor; and five-time nominee for the Nobel Peace Prize.
You would think such an overachiever would be a shoe-in for secretary of state in the Barack Obama administration, especially if that person was also a member of a highly sought-after ethnic group that gave two-thirds of its votes to Obama and helped him win four battleground states. And what if that person also happened to be a former presidential candidate who had stuck his neck out to endorse Obama over Hillary Clinton and wound up persona non grata among Team Clinton and even likened to "Judas" by ever-loyal Clintonista James Carville?

Finally, what if that person had the backing of the National Hispanic Leadership Agenda, an association of 26 national and regional Hispanic civil rights and public policy organizations. The NHLA recently sent a letter to President-elect Obama recommending New Mexico Gov. Bill Richardson as secretary of state. John Trasvina, the group's chairman who also serves as president and general counsel of the Mexican American Legal Defense and Educational Fund, wrote: "No one is more qualified to serve as our country's chief diplomat than Gov. Bill Richardson." Board member Janet Murguia, the president and CEO of the National Council of La Raza, added this about Richardson: "His appointment would send a powerful message to Latinos throughout our country as well as to our neighbors in this hemisphere."

You can click the link above to read the rest of the article. It's greatness - a devastating indictment on the politics of choosing She Whose Name Is Not Spoken for Secretary of State, instead of Bill Richardson. (I took the opportunity to read some of Ruben Navarrette's other editorials. Here's his bio on the Washington Post Writer's Group Website.)
Posted by The Whited Sepulchre at 9:41 AM

Nice inspirational poster. I posted about that a while ago. It's obvious he's far more qualified. But since when have qualifications had anything to do with anything?

Slacker,
I'm glad you worked up the energy to rise up and post a comment.
Some of those who study the Book Of Revelation for signs and portents, they believe that Obama is trying to pry her out of the Senate so he can get rid of her when the usual Clinton scandals erupt.

I also thought Richardson was a shoe-in for Sec of State, based on his excellent foreign service resume. But, since it's obvious no experience or talents (other than crowd pleasing) is necessary to be President, I guess the same goes for cabinet positions. I'm sure there are many other better choices for Homeland Security than Janet Napolitano, too. It's going to be a L-O-N-G four years.