From New Testament scholar Bart Ehrman's new book "Jesus, Interrupted", on the possibility of historical evidence for a miracle:

"In Jesus' day there were lots of people who allegedly performed miracles. There were Jewish holy men such as Hanina ben Dosa and Honi the circle drawer. There were pagan holy men such as Apollonius of Tyana, a philosopher who could allegedly heal the sick, cast out demons, and raise the dead. He was allegedly supernaturally born and at the end of his life he allegedly ascended to heaven.....Anyone who is willing to believe in the miracles of Jesus needs to conceded the possibility of other people performing miracles, in Jesus' day and in all eras down to the present day...."

"But for now I want to focus on the miracles of Jesus. His resurrection wasn't the only miracle. According to the Gospels, Jesus' entire life was filled with miracles. He was born of a woman who had never had sex. As an adult he performed one miracle after the other - healing the blind, the lame, the deaf, the paralyzed, casting out demons, restoring life to those who had previously died. And at the end of his life came the biggest miracle of all; he was raised from the dead, never to die again." 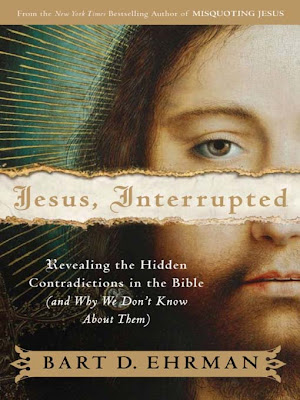 "Despite the prominence of miracles in the Gospel traditions, I don't think historians can show that any of them, including the resurrection, ever happened..... And I am not saying that we cannot demonstrate that miracles happened merely because our sources of information are not completely trustworthy. To be sure, that, too, is true. Our first records of any of Jesus' public miracles were written thirty-five to sixty-five years after the fact, by people who had not seen any of those things happen.....And these records are absolutely filled with discrepancies, especially the resurrection narratives themselves....."

"But that is not why historians cannot show that miracles, including the resurrection, happened. The reason instead has to do with the limits of historical knowledge. There cannot be historical evidence for a miracle."

"To understand why, we need to consider how historians engage in their craft. Historians work differently from the way natural scientists work. Scientists do repeated experimentation to demonstrate how things happen, changing one variable at a time. If the same experiment produces the same result time after time, you can establish a level of predictive probability: the same result will occur the next time you do the experiment...."

"Historians work differently. Historians are not trying to show what does or will happen, but what has happened. And with history, the experiment can never be repeated. Once something has happened, it is over and done with....."

"Did Lincoln write the Gettysburg address on an envelope? Did Jefferson have a long-term love affair with one of his slaves? .....Make up your own questions: there are billions.. There is nothing inherently improbable about any of these events; the question is whether they happened or not. Some are more probable than others. Historians more or less rank past events on the basis of the relative probability that they occurred. All that historians can do is show what probably happened in the past."

"That is the problem inherent in miracles. Miracles, by our very definition of the term, are virtually impossible events.....by their very nature, (they) are always the least probable explanation for what happened. This is true whether you are a believer or not. Of the six billion people in the world, not of one of them can walk on top of lukewarm water filling a swimming pool. What would be the chances of any one person being able to do that? Less than one in six billion. Much less."

"....historians cannot establish that miracles have ever happened. This is true of the miracles of Mohammed, Hanina ben Dosa, Apollonius of Tyana - and Jesus."

The goofiest part is from Bishop William Willimon, who claims "He keeps presenting this stuff as if this is wonderful new knowledge that has been kept from you backward lay people and this is the stuff your preachers don't have the guts to tell, and I have," Willimon says. "There's a touch of arrogance in it."

If anything, Ehrman doesn't present his theses as being new at all. He repeatedly says that all this info has been out there for a long, long time. THEN Ehrmann marvels that it's the stuff your preachers don't have the guts to tell.

Posted by The Whited Sepulchre at 9:32 AM

I just finished that book and it was absolutely amazing. As a bible beating kid, I was always bothered by some of the passages that seemed to contradict each other.

After the finishing the book, I just wanted to scream: Why haven't I been told this before?

The book is irrelevant since Jeebus never existed in the first place.

WS - this is why I need you back in our Sunday School class (and it's not so you will be saved).

Actually, it's perfectly possible to have evidence for miracles. The problem is that somebody simply *saying* it happened is not sufficient. (That *could* just be really bad sci-fi/fantasy.)

Physical evidence would be good - e.g. the mountain that came to Mohammed should still be there, still being geologically impossible in the desert somewhere. Or even scriptural evidence, if it was information that humans could not have produced. (There are certain maths problems that involve that sort of thing.)

Even data that *could* be produced, but only by totally anachronistic methods that we are highly confident weren't available at the time - such as scientific data on molecular structure or deep cosmology - would count as *evidence* (which is not the same as proof, but pretty good anyway).

Just to take one example of the sort of thing I mean, consider Srinivasa Ramanujan, an Indian mathematician with little education who produced the most strange but extremely advanced mathematical formulas, challenging the best Maths professors in the world to keep up with him, who when asked how he came up with them once said that the Goddess Namagiri whispered them to him in his dreams.

By any objective definition, this surely makes Ramanujan a prophet, and his mathematical notebooks holy scripture.

And if you could argue that their sophistication and accuracy were beyond human capabilities, this would count as good evidence, which would stand for a long time, that there was something more than human here. It would have to be taken seriously, at least.

An actual intelligent deity, capable of designing this quantum mechanical universe, would be *easily* capable of generating physical or scriptural evidence of such sophistication and obvious artifice that it could not be denied.

With the possible exception of Namagiri, not a *single one* of the thousands of Deities we know that mankind has believed in over the millennia has ever made the attempt.

People will believe anyway, and maybe the Gods know that and therefore don't bother. Evidence does not appear to be the issue anyway. Even Christians who try to justify their belief rationally, if they *know* about Namagiri's 'scriptures' they don't therefore convert.

But *if they really wanted to*, any God or Goddess could make scepticism very hard indeed.

Bart Ehrman has been getting a lot of flak. He is the author of the book Jesus Interrupted, a book about Biblical inaccuracy, and a critical look at the core of Christianity through logical research of history, and more importantly, the historiography (the study of the writing of history and how it was compiled) of the Bible. A lot of people would give unsecured loans to quiet him. The upcoming release of Angels and Demons, sequel to the DaVinci Code, has brought up a lot of debate over the accuracy of the Bible and the development of the Christian faith. Controversy, even if it's backed by accurate research brings sales, which means Bart Ehrman might never need payday loans again.

A formal logical proof for the existence of an Intelligent and Perfect Creator (of the universe) is found at the blog bloganders.blogspot.com (left menu).