Voodoo Blue - why you need to go hear them

Stevie Ray Vaughan lives and walks among us.
He has risen ! - Luke 24:6

I guess that statement requires some background.

My elementary school, middle school, and high school friend Henry Farrish got in touch with me through the miracle of Facebook a few months ago. (I don't know why we both make that distinction about the grades. North Sunflower Academy has grades 1-12 under one roof.)

Addition from May 4th....This is what we looked like before we set sail with Captain Morgan. 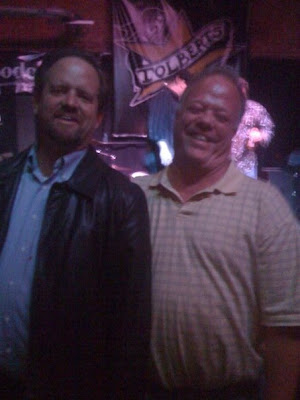 Henry had been telling me about a Stevie Ray Vaughan tribute band called Voodoo Blue, and he called earlier this week inviting me to a Voodoo Blue show at Tolbert's. Click here for an earlier rave about Tolbert's chili. I don't get too excited about tribute bands. The woods are full of 'em. But I'll drive to Grapevine just for a bowl of Tolbert's chili.

I was amazed. Lord have mercy, Voodoo Blue is a good band.
This isn't merely a group of guys who jam out on SRV cover tunes.

This is something new. This is slack-jawed, "pour Bud light in one side of your mouth and have it slowly leak out the other side" amazement.

Youtube doesn't do their sound justice, but here they are doing "Love Struck Baby" :


Tommy Katona, the band's guitarist, is a child. I repeat, he is a child. A 24-year old prodigy from the deep blues/Texas Rock hotbed of.... Hungary.
Yep. Hungary.
Tommy saw a Stevie Ray video when he was four years old, and immediately knew what he wanted to do with the rest of his life. Amazing. I haven't heard anything like it. The guy is technically flawless, but the best part of hearing him is the sound. Tommy Katona doesn't play the same notes as SRV. He produces the same sound.
Here's a Tommy bio that someone in Europe put together.


Here I am with Tommy sometime during their first break, before Henry had plied me with a half dozen of those Captain Morgan and Coke things that he drinks, and before Tommy and Company made my face start bleeding. 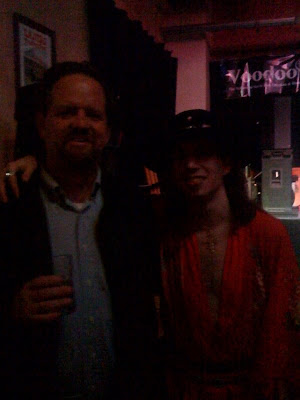 Through a fortunate coincidence, I got to sit at the same table with various family members of the band. Great folks. Talked for a few minutes with Randy Rodriguez, the band's SRV soundalike vocalist. Henry introduced me to Steve Buckner, the bass player. Great time had by all. I can't say enough good things about the evening.

Yes, I really am too old for this, but Lord have mercy it was fun.

I saw these guys at a Grapevine festival... I was not intending to go to the festival and was doing something with my daughter, when I got out of the car, in the distance I heard what sounded exactly like SRV. I literally ran over and saw these guys. At first, I thought it was Jimmy Vaughn and some SRV impersonator, but thought that was too tacky.

These guys were great! And from a distance in a festival setting, it was like being back in time! You're right - same SOUND. Like SRV, he emotes through his instrument. I know Coyne is 'educated in guitarology', but he's a SRV non-liker. we need to have a "talking to" with that boy.

BTW, Jimmy Vaughn is a well know libertarian. We need to get him involved in something we're doing at some point!! Maybe at the state convention in Austin.

Thank you Henry Farrish for introducing me to Alan.

Alan, it was a pleasure meeting you at Tolbert's the other night and your blog of complimentary comments about Voodoo Blue is greatly appreciated. We invite all readers of Alan's blog to come see Voodoo Blue perform. This is a great band!

Alan, I look forward to seeing you again later this month at Spencer's Corner. And, your first Captain Morgan is on me!