I saw this bumpersticker in Fort Worth today, and started thinking.... 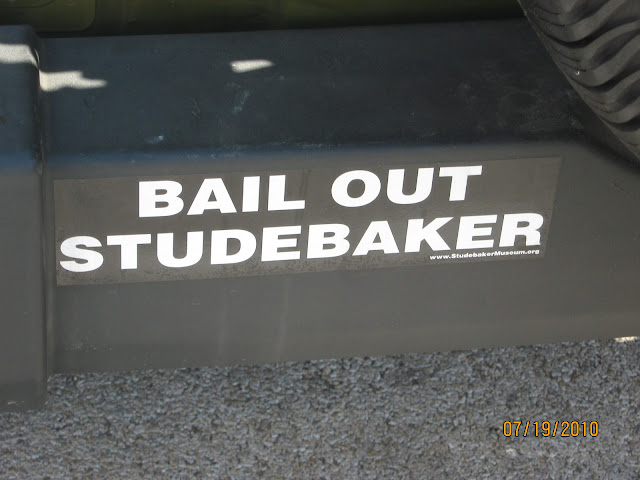 Well, I found out when I went to Bally's fitness to put in some mandatory treadmill time.

The Bally's TV's were tuned to CNN, which featured Larry King interviewing T. Boone Pickens, mostly about the BP oil spill, but partly about AMERICA'S DEPENDENCE ON FOREIGN OIL and the Pickens plan to replace oil with gentle gusts of wind from unseen fairy flatulence which would be enough to power Pickens Inc. windmills paid for by your taxes.

T. Boone Pickens wants your money, just like Chrysler wants your money.  They both go through government to force the wealth transfer.  In the case of T. Boone, he just wants his bailout up front.  Just like Chrysler, he can't make it without you.  Nobody in his right mind would voluntarily a dime of their own funds for the windmill scheme unless he knew up front that Boone was going to get some pork.

One thing about AMERICA'S DEPENDENCE ON FOREIGN OIL....think of an individual that you do business with, preferably a little guy.  Think of somebody with an oil change franchise, or a seamstress, or a Mom'n'Pop restaurant.  Do you depend on them, or do they depend on you?

It's mutual, isn't it?  You're trading stuff with each other.  If you didn't buy the oil changes, the clothing, or the meals from them, they would have to find someone else to sell the stuff to.  Finding new customers is a hassle.

Political hacks like to talk about AMERICA'S DEPENDENCE ON FOREIGN OIL.  Well, that street runs both ways, but you never hear them talk about FOREIGN OIL'S DEPENDENCE ON AMERICAN DOLLARS.  If the dreaded foreigners couldn't sell their oil to us, they would have to sell it to someone else.  Their overhead is high, just like ours is.  They have to keep the money rolling in.. If they want to cut us off, they still have to sell it to somebody who is not yet purchasing very much oil.  Somebody like....well, I can't think of anybody else.  But whoever bought it would wind up selling most of it to us.

Frederic Bastiat figured it out 150 years ago.  He wrote:

The sort of dependence that results from exchange, i.e., from commercial transactions, is a reciprocal dependence. We cannot be dependent upon a foreigner without his being dependent on us. Now, this is what constitutes the very essence of society. To sever natural interrelations is not to make oneself independent, but to isolate oneself completely.

Giving T. Boone Pickens his bailout money ahead of time would be like reviving Studebaker to end our dependence on Toyotas.
Posted by The Whited Sepulchre at 11:06 PM

Every utterance of "dependence" with respect to trade is sheer nonsense. "Independence" and "security" are the hue and cry of every would-be protectionist.

Nobody ever talks about China's dependence on foreign food.

We are not dependent on oil; we USE oil. It provides tremendous utility. It gets us where we want to go. It brings goods to market. It is used to create asphalt, plastics, eye drops, and hundreds of thousands of other products, some of which we export.

We are no more or less "dependent" on oil than we are on the internal combustion engine, steel, aluminum, roads, or the wheel.

In fact, if the world's supply of oil magically vanished tomorrow, we would have a gasoline substitute being produced (at high price) within a matter of DAYS. Within a few months, the entire economy would be running on alternative fuel, albeit at a much greater cost.

Before oil, we used whale blubber and coal. After oil, we'll use something else. As the supply of oil dwindles, the relative price of alternatives falls.

The US is the top producer of US energy consumed. We produce more oil than we import from all the OPEC countries combined.

Our leading sources of foreign oil are Canada and Mexico. Saudi Arabia is in third place followed by Nigeria and Venezuela. We export about 1/5th of the volume of oil that we import.

Hybrid vehicle batteries and motors use relatively large quantities of rare earth metals such as dysprosium and neodymium, 95% of which are mined in China. Wind turbines use these metals too. Nobody is screaming about American dependence on Chinese dysprosium!