From the UK's Telegraph, on the state of Britain's National Health Service.

Women in labour have been forced to wait while epidural equipment was borrowed from other hospitals, while other patients have been denied chest drains and radiology supplies, according to doctors at South London Healthcare Trust. 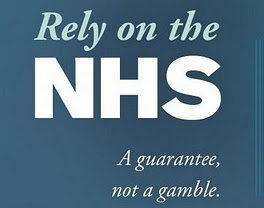 Minutes of a meeting between medical staff and the trust’s chief executive say “cash flow” problems at the trust which has a £50 million deficit, mean vital equipment is regularly not ordered.


Doctors told managers “again and again” that consultants were unable to know that equipment was missing until the last item had been used, when their patient was already lying on the table, according to the minutes of June 16 meeting.

It says doctors fear that the trust’s hospitals will be left “in the same situation as Mid Staffs” where hundreds of patients died amid failings in basic care.

James Brokenshire, Conservative MP for Old Bexley and Sidcup, contacted the CQC after eight clinicians told him they feared patients were being put at risk, but were afraid of the repercussions if they were named.

Socialized medicine.  All of the "civilized" nations have it.
Here's Donald Berwick, Obama's choice to lead the upcoming Obamacare disaster, explaining to a group of British M.D.'s why their system is so freakin' awesome.

Posted by The Whited Sepulchre at 10:11 AM

Email ThisBlogThis!Share to TwitterShare to FacebookShare to Pinterest
Labels: Britain, doctors, healthcare, National Health Service, obamacare, People Who Are Off By Several Orders Of Magnitude, Socialism

Is all this taking place after regular business hours?

Have fun at Camp Blownstar. Sorry I'll miss you this year!

Congress should be forced to get their health care in Cuba, a prison, or a VA hospital.

Stephen,
I was born before a long fourth of July weekend, and therefore I feel lucky to have made it. Oh....they only have that problem in the humane, civilized countries, right?

Leslie,
Wish you could be here. We're having a great time.

I always ask Canadians I meet about their healthcare system. And to a person the reviews are all negative. One guys said this, "They just want to make sure that everyone is reduced to the same level of suffering."