Here are seven quotes on the incredible shrinking Republican budget cuts....actually, there are just four, but no one seems to be paying to real numbers these days.

“Only in Washington can a budget that spends more than it did the year before, with a larger deficit, be portrayed as ‘cutting.’” - Rand Paul

The picture already emerging is of legislation financed with a lot of one-time savings and cuts that officially "score" as savings to pay for spending elsewhere, but that often have little to no actual impact on the deficit. As a result of the legerdemain, Obama was able to reverse many of the cuts passed by House Republicans in February when the chamber passed a bill slashing this year's budget by more than $60 billion.


...Instead, the cuts that actually will make it into law are far tamer, including cuts to earmarks, unspent census money, leftover federal construction funding, and $2.5 billion from the most recent renewal of highway programs that can't be spent because of restrictions set by other legislation. Another $3.5 billion comes from unused spending authority from a program providing health care to children of lower-income families. - Andrew Taylor, Associated Press

The numbers just keep getting smaller, don’t they? Republicans started the year demanding $100 billion in cuts. But it quickly turned out that when they said $100 billion, they were just talking hypothetically. Instead, they meant $100 billion on an annualized basis. The next we heard, Republicans were aiming to trim $61 billion. And not one penny less! Eventually, they agreed to a deal that they claimed cut $38 billion. But of that $38 billion, it turns out, the real cuts only add up to about $14 billion. Any bets on how many days before the cuts disappear entirely? - Peter Suderman, Reason Magazine

I do not grudge our loyal, brave people, who were ready to do their duty no matter what the cost, who never flinched under the strain of last week - I do not grudge them the natural, spontaneous outburst of joy and relief when they learned that budget cuts the hard ordeal would no longer be required of them at the moment; but they should know the truth. They should know that there has been gross neglect and deficiency in our defences; they should know that we have sustained a defeat without a war, the consequences of which will travel far with us along our road; they should know that we have passed an awful milestone in our history, when the whole equilibrium of The United States Of America  Europe has been deranged, and that the terrible words have for the time being been pronounced against John Boehner the Western democracies:


"Thou art weighed in the balance and found wanting."    - Winston Churchill 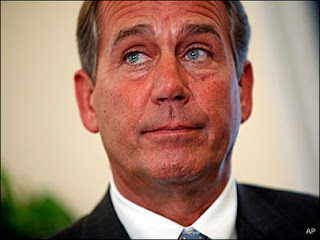 The picture of John Boehner came from ImpeachJohnBoehner.com
Posted by The Whited Sepulchre at 6:48 PM