Some are more equal than others

Last week, as the Detroit News reported, Obama announced a plan "to 'green' the federal fleet": 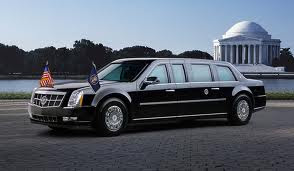 "I'm directing our departments and our agencies to make sure 100 percent of the vehicles they buy are fuel-efficient or clean energy cars and trucks by 2015.Not 50 percent, not 75 percent--100 percent of our vehicles," Obama said. 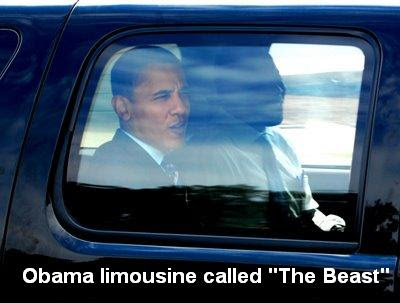 The News also reports that "some federal vehicles for law enforcement and security purposes will be exempt"--among them "the GM-built Cadillac presidential limousine and other vehicles in the motorcade."

There are always exceptions to the rule.  There are always exemptions.
Well, you say, there should be some exceptions for things like "The Beast" limo.
No, not for something like this.  For those of us who see every word from this guy's mouth as hypocritical posturing, there shouldn't be an exception.  If the Green Energy scam is supposed to be about shared sacrifice, then Barack should stay at the White House with Michelle and the girls.  NOT riding around the countryside preaching about Green Energy from the back seat of a car that gets the same miles per gallon as a Tomahawk missile.
The people who wrote Obamacare gave themselves exemptions.
"The Beast" limo gets an exception.
As long as this man has supporters, he will give them, and himself, exemptions.
"Not 50 percent, not 75 percent--100 percent" of the time.
Posted by The Whited Sepulchre at 9:36 AM

Email ThisBlogThis!Share to TwitterShare to FacebookShare to Pinterest
Labels: Good for thee but not for me, machinery painted green, Teleprompter Jesus

Let's give My Hero, Zero the benefit of some doubts. He NEEDS a bomb proof limousine because he's sooo important. He NEEDS a 747 with all its sophisticated features.

But let's not forgive SENATOR Obama for owning a Chrysler 300 HEMI which he promptly sold the moment a reporter asked him about it. Then he bough a hybrid SUV for his campaign. I guess he didn't realize the CO2 emitted producing the 300 was a sunk cost, but the CO2 emitted from his new hybrid was added to the atmosphere.

Lets not forgive him for heating the White House to 72 degrees because, "he's from Hawaii and likes it warm."

Let's not forgive him for throwing a $165 million inauguration party during "the greatest economic crisis since the Great Depression" - a party that generated 100 tons of trash and emitted millions of tons of CO2 for the hundreds of thousands of people who flew and drove to DC for the event.

Let's not forget how he flew his 747 from DC to Chicago to Phoenix to Denver just to sign his first bill - a clean energy bill, while Biden and Pelosi took separate planes to the same event.

I wish I had the data to start a website called "Obama's Carbon Footprint."

But don't many of the rest of is NEED big cars too? Don't we have families, dogs, and cargo to haul? Don't we like to keep warm in winter and cool in summer? Who's to say what WE need other than ourselves?

On second thought, the only car Zero needs to drive is a Smart Car, and the only way he should get around the country is by Amtrak.

"the same miles per gallon as a Tomahawk missile."

I suspect a lot less actually.