Atlas Shrugged - They didn't screw it up.

I went to the local premiere of the Atlas Shrugged movie last night in Southlake. 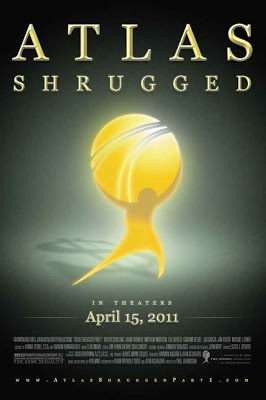 Southlake is having an arts festival in the same shopping center as the theatre, and I decided to grab something to eat and check out the artists before the movie started.  I found a great Steak-K-Bob, paid for it, and then decided to step into the beer booth for a Bud Lite.

Beer Lady: Do you have coupons?

Beer Lady: You know how it is, sorry for the hassle, but we have to ask you to purchase some coupons at the next table, and then you can redeem the coupons for beer.

Beer Lady: You know how it is, it's one of the rules of the Texas Alcoholic Beverage Commission.  We're not allowed to sell beer, but we can exchange beer for coupons that were purchased elsewhere.

So I took four steps to the left, bought four dollars worth of coupons from the Coupon Lady, took another four steps back to the right, and exchanged my coupons with the Beer Lady for a Bud Lite.

This ritual didn't help anybody, it added unnecessary costs to the transaction, no one would've been harmed if the Beer Lady had been allowed to take my money.  But we can't allow Bud Lite Beer Ladies to simply sell Bud Lite without the State's blessings, can we?

This puts one into a fine frame of mind for watching Atlas Shrugged.  Sorry for the digression.

The screenplay isn't particularly good, the acting is nothing special, the Reardon Metal tracks and John Galt trains employ special effects that look like early 1980's.  The editing is kinda sloppy.  I was sitting by my friend Michael Coyne, a fine guitarist, and he shared my opinion that some of the background music was good, and some of it seemed borrowed from another movie.  But at least they didn't screw it up !!!

I once spent two years of my life doing metal price quotes.  When pricing metal, there are a lot of factors you have to take into account, and that's just for building fruitstands.  In this movie, Hank Reardon instantly commits to about half a dozen massive metal deals without even calculating the expenses on the back of a napkin.  Granted, he was trying to bed his customer, but one of those deals was for a bridge that rivals anything in North America.  I almost broke out in giggles.  But they didn't screw it up !!!!

I spent last weekend with my daughter at a two-day beer and music event called "Chilifest".  There were people at Chilifest who had an alcoholic beverage in hand for 48 hours.  That was nothing compared to the cast of Atlas Shrugged.  Those actors drank like Prohibition was just around the corner.  I stayed for the end credits, just to see if "Turning Leaf" had paid a product placement fee.  But at least they didn't screw it up !!!

Another problem....Rand's novel is set in an imaginary future.  Since this was a very low-budget production, there wasn't much money for funding any whiz-bang future.  So the future looks like....now, but with lots of trains.  There wasn't much money for the set designer to come up with any elaborate CEO offices, or a corporate Valhalla for the Taggart board meetings.  And the dress that Dagny wears to the Reardon anniversary party?  I think I've seen it before.  On a bridesmaid.  But the bridesmaid's version didn't need ironing.  The filmakers made some mistakes in the movie adaptation of this novel, but at least they didn't totally screw it up !!!

I'll purchase the DVD to this thing because it reflects reality.  Washington crusaders are shown to be the calculating parasites that they are.  Entrepreneurs are shown working longer hours than the people that they support.  This is a movie about a business and corporations, but the CEO's of these corporations are not in an underground lair, plotting to kill all their customers from deep inside a hollowed-out volcano, just so they can increase their margins.  You start thinking....what would happen if the a-holes that run my company went on strike?

There was a very libertarian audience on hand for the showing in Southlake, so Dagny Taggart's line about "I'll let you and your Washington friends solve that problem" got a massive laugh.  One sequence of headlines and magazine covers had the guys sitting behind me saying things like "saw it today", "now", and "General Electric".

The audience cheered loudly when the title flashed on the screen, something I think I've only seen done for the Star Wars, Indiana Jones, and Harry Potter movies.

They cheered just as loudly when the movie ended, mostly because....they didn't totally screw it up !!!

When the book was released in the late 1950's, mainstream critics ripped it all to pieces, but it has gone on to be one of the bestselling novels of all time, and one of the most influential.  I hope this first installment will earn enough to justify some upgrades on the next two.

Overall, just because of the subject matter, I'd give it a 6 or 7 on the 10 scale.  It's nowhere near as good as the book, but with only a 20 million dollar budget, it's far superior to the Barack Obama Community Theatre version that has cost us trillions.  Now THAT version is screwed up. 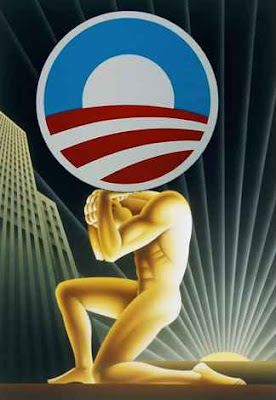 Posted by The Whited Sepulchre at 12:32 PM

That Atlas with the Obama "O" is AWESOME! And I wondered what the deal was with the coupons. I asked a friend in the wine biz to donate a case of wine for a silent auction. He said that TABC rules prohibited him from doing so, but he could sell it to me for an outlandishly low cost and I could do whatever I wanted with it. Sheesh.

I have not heard any really raving reviews, but I hope the movie does well. I am thinking of going on Monday.

I'm glad you liked it, but I think I'll give it a miss.

Also, TLG, I don't know if you made it to the Main Street Arts festival in Fort Worth this weekend, but you could buy all the art you wanted with cash, credit cards, silver, or barter. But food and drink? Coupons only.

I saw it today and I thought it was fairly good, very true to the book which was both a bonus and a curse, the bonus because it allowed many of the ideas in the book to be presented, a curse because like the book at times it was slow and wordy and had a feel of a soap opera.

I saw it last night, and was suitably impressed. I'm not really in agreement with the blog author however that, "Another problem....Rand's novel is set in an imaginary future. Since this was a very low-budget production, there wasn't much money for funding any whiz-bang future. So the future looks like....now, but with lots of trains."

It's a near future movie. You wouldn't notice much difference if you went to 2006 in a time machine, just like you won't notice much 5 years into the future. It's completely plausible in that regard so I wouldn't call it a problem, myself.

Dagny's scream though? That was a bit much. I saw someone else say that and at that part of the movie, it was a bit over the top.

All in all though, I simply couldn't believe the movie was rated so badly by critics. It's not a Christopher Nolan flick, but few are. It's a content thing, and there is *no* doubt about that after seeing it. Critics are *so* disgusted by the ideas the protagonists have, that they may as well have been playing scenes out of Main Kampf as far as Ebert was concerned.