From Caroline May at The Daily Caller: 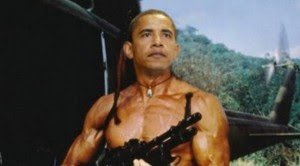 To date not only has the President authorized the hit on Osama Bin Laden, but also provided for the killing of numerous other threats, including but not limited to: 3 Somali pirates; Baitullah Mehsud; Najmiddin Jalolov; Saleh al-Somali; Abdallah Sa’id, Hakimullah Mehsud; Kaddafi’s youngest son and three grandchildren; thousands via his large increase in drone attacks; and has ordered the assassination of the American terrorist Imam Anwar al-Awlaki.
Obama intensified the Bush administration’s effort in Afghanistan and Pakistan, increasing troop levels and number of stealth drone attacks in Afghanistan and Pakistan.

That's pretty good for a Nobel Peace Prize winner.
The rest of May's article is pretty good, where she gets around to Obama butchering and slaughtering the U.S. economy.


Posted by The Whited Sepulchre at 2:08 PM

And the definition of irony is...

I'm going to try to come up with a meter of some sort that will display the Teleprompter Jesus body count.

Put it right next to the meter of his carbon footprint.

Yeah, because it's not justifiable to kill someone whose mission is a limitless string of murders in their past and future. The nerve of him!