The Los Angeles May Day rally, featuring the SEIU and Communist Party

Let's look in on our Commander In Chief's buddies at the Service Employees International Union, shall we?

The SEIU is the union outfit that gave Obama lots of help in the ObamaCare battle.  Their president, Any Stern, has made more White House visits than any other non-government employee.

All pics below came from this site, and were chosen by a Mr. Zombie.  (I don't know if his name is an intentional reference to what our Commander In Chief has done to our economy.)
Here's a sampling of Mr. Zombie's fine work:

A May Day rally in Los Angeles, co-sponsored by the SEIU and various communist groups, as well as other unions, reflected yet another step in the normalization of self-identified communist and socialist ideologies in the Obama era. Not only did the SEIU help to organize the rally in conjunction with communists, they marched side-by-side with communists, while union members carried communist flags, communists carried union signs, and altogether there was no real way to tell the two apart.

I'm currently reading a massive tome called "The Black Book Of Communism".  The authors of this massive black doorstop attempt to outline all the deaths, destruction, and misery caused by that godawful doctrine.  Their estimate is that the communists, those wanting to "spread the wealth around"  (to quote our Commander In Chief once again) by means of force, killed more than 94 million people.

The Nazis were amateurs.  To really do some damage, you need to display a concern for fairness and equality.  At gunpoint, with gulags and re-education centers if necessary.

Here's a useful idiot with her red commie flag, and her worse-than-Nazi sentiments.  God, I don't understand this mindset.  Have these people never read a book ???? 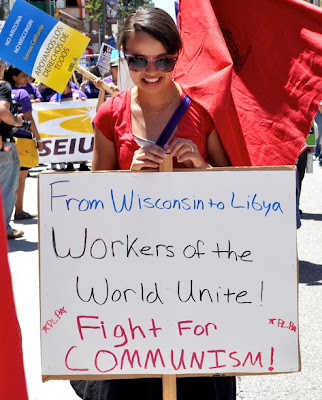 Here's the breakdown of the body count, according to The Black Book Of Communism:

65 million in the People's Republic of China

The Black Book is documented to the point of being ridiculous.  Communism is the worst thing to ever happen to this planet, and I bet half the U.S. population couldn't tell you anything about the tragedy outlined above.  That estimate probably includes this booger-eater. 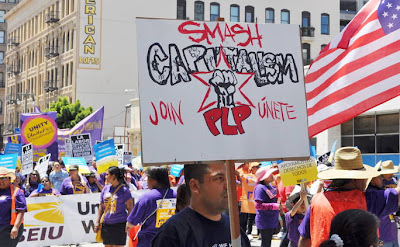 And here they are, your government's employees, putting on their purple SEIU shirts and proudly carrying their red Chairman Mao flags.
I have friends in China whose parents were sent out to the countryside to be "re-educated" during the Cultural Revolution by these socialist assholes.  Some of the parents didn't make it back.

Just out of curiosity, are the Marxists/Communists/Socialists supposed to be better than Nazis because their intentions were mistaken for "just" and "noble"?  Is bending everyone to the will of the state supposed to be a good thing? 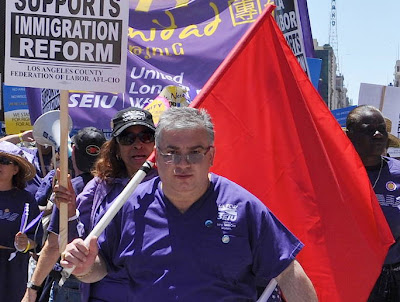 Is there any doubt in your mind why our economy is in the tank? 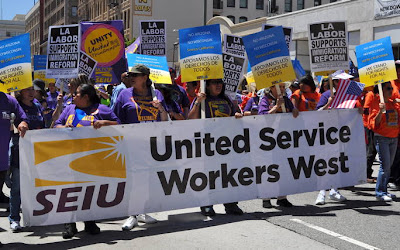 Once everybody started mingling, the colors helped identify the players. 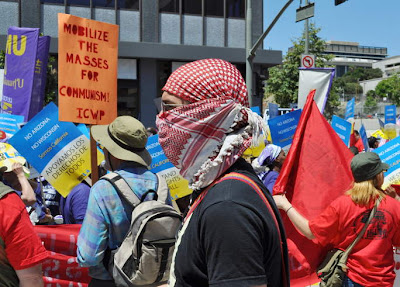 Here's some video from the march. Enjoy the brief images of child murderer Che Guevara:


This makes me ill.
Posted by The Whited Sepulchre at 7:06 PM

What a sickening display. So many misguided people!

Yeah. It makes me angry, then sad.

FYI: "Mr" Zombie is a female photo blogger in the Bay Area. Over the years she has used the "one picture worth a thousand words" theme to expose the crazies in California.

I've been following Zombietime since the beginning.

The photos show that what goes on in the Bay Area is not an unusual or infrequent item.

I remember claiming here once that if I wanted to find evidence of American liberals hating America or supporting our enemies, I only had to walk to the closest coffee shop on any given day.

Of course I don't believe ALL liberals hate their country - perhaps not even most of them. But there's no doubt that many of them do. You have to go someplace in the farthest reaches of Idaho to find someone on the Right who hates America.

Naw. Google's "Blogspot" program puts comment moderation in place on all posts that are more than two weeks old.
It keeps spammers from ganging up on dead sites and older posts.

Speaking of things that are dead and old, how's the SEIU doing these days?